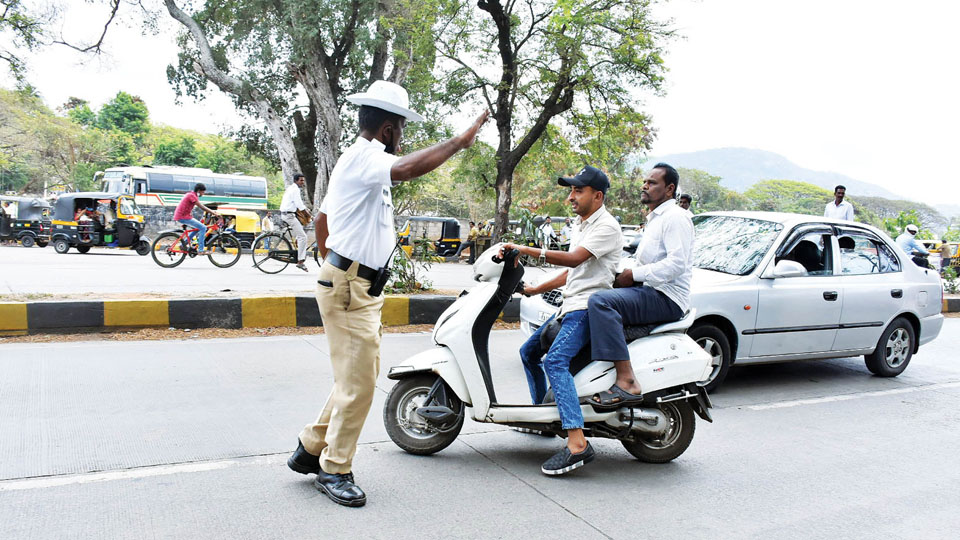 Mysore/Mysuru: City Traffic Police has been helping the Government to fill its coffers with the huge amounts collected in the form of fines from rule violators. Every day, over 5,000 cases are being booked and Rs. 5 lakh is being collected as fines. On an average, the Police collect a whopping Rs. 1.50 crore per month.

So much so that many Policemen have dumped their basic duty of manning traffic and seem to be toiling hard to fill the Government treasuries. They are spotted at every street corner, main roads, industrial areas and even residential pockets. Sporting face shields, masks and gloves, Policemen conduct checking on almost all roads. Poor supervision by Traffic Police at busy junctions have also increased road rage and have widened Police-public rift.

The fine amount that was meagre earlier has now seen a dramatic increase after the implementation of Motor Vehicles (Amendment) Act 2019. Police said that increased vehicular movement following reduction in COVID-19 positive cases has increased the number of traffic rule violators.

“We have intensified checking of vehicles on city roads as there is free movement now. On an average, 5,000 cases are being booked daily against those using mobile phones while driving/riding, jumping signals, rash and negligent driving, triple riding, helmetless riding and other violations and about Rs. 5 lakh is being collected,” Assistant Commissioner of Police (Traffic) Sandesh Kumar told Star of Mysore.

Police personnel led by Inspectors and Sub-Inspector of the five Traffic Police Stations — Devaraja, Krishnaraja, Narasimharaja, V.V. Puram and Siddarthanagar Traffic Police Stations, are conducting checking of vehicles at prominent junctions and main roads in their jurisdiction every day during mornings and evenings.

Armed with mobile phones and tabs, the Traffic Police personnel click photos of traffic violations and are registering cases against violators. Also, the 59 CCTV cameras installed across the city are capturing traffic rules violators and based on the footages, notices are being sent to the owners of the vehicles.

After a gap of nearly a year, the Bengaluru Traffic Police has decided to restart special drunk driving checks. The drunken drive checks were stopped last March last year owing to the enforcement of COVID-19 guidelines while keeping in mind the safety of the traffic personnel. However, there are no such plans to restart fines in Mysuru as of now.

Mysuru City Police Commissioner Dr. Chandragupta said that at the moment there are no plans of restarting the drunken driving check. “The number of COVID cases is on the rise in Kerala and we are keeping a strict vigil on people entries from the neighbouring State. Once the cases subside, we will think about re-introducing drunk driving checks,” he told SOM this morning.