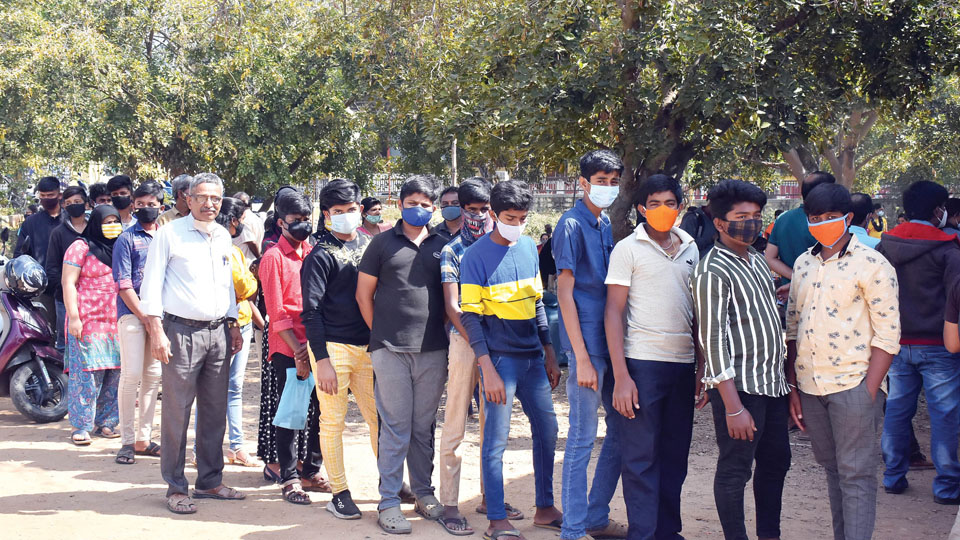 Mysore/Mysuru: There was good response for free RT-PCR test being held at J.K.Grounds in city this morning for students and teachers in the wake of re-opening of schools and colleges from Jan 1.

Two-day testing, which began today, was organised by District Lions Services Foundation, Dist 317A in association with District Health Department, Department of Public Instruction, Mysuru City Corporation (MCC) and Mysore Medical College and Research Institute (MMC&RI). Testing will be done from 10 am to 4 pm today and tomorrow.

Around 250 students and teachers had turned up at the grounds to undergo free testing in the morning. Some parents, who had accompanied their wards to the venue, too underwent COVID test.

Pandals have been erected at two to three places for the health staff to collect the samples.

Initially, there were two counters and it was increased to four due to good response of teachers and students. The Health Department was ready to open more counters as and when more number of persons would come to the venue.

The Aaadhar number and mobile number of every student and teacher was collected at the counter before collecting the sample. Results would be sent to the mobile phone numbers given at the registration counter. A number of parents also underwent free testing along with their children. Results are expected by this evening, said an officer of Health Department.

The organisers are expecting around 400-500 students and teachers to undergo free RT-PCR test on the first day. The State Government has made it mandatory to undergo test 72 hours before re-opening of schools and colleges and produce negative report at the time of entering the classes.