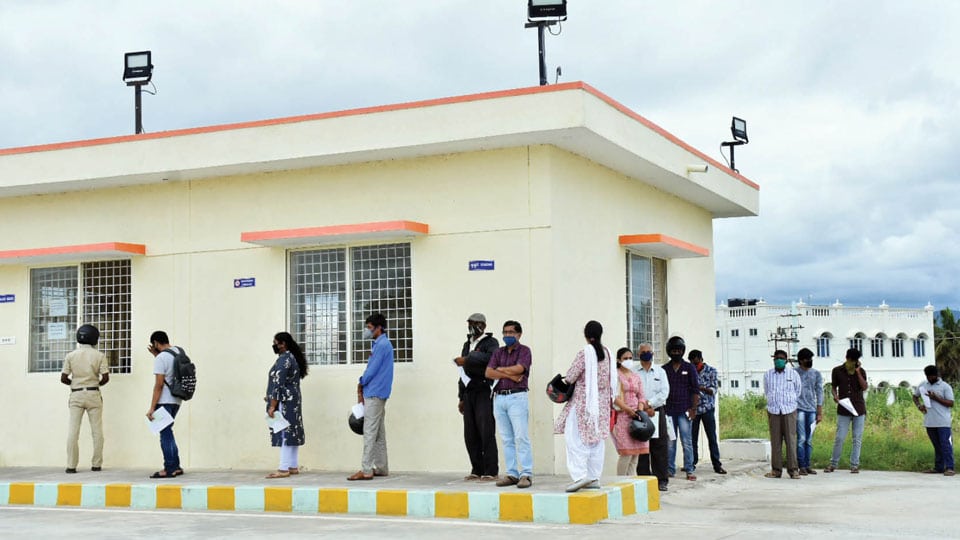 Mysore/Mysuru: After three months of COVID-induced lockdown and a phased unlock process, the two Regional Transport Offices (RTOs) in city have resumed Learner’s (LLR) and permanent Driving Licence  (DL) tests. But as the RTO East and West have restricted the number of candidates taking the daily tests, there is a shortfall in revenue.

Karnataka Regional Transport Office has resumed registration of vehicles and issuing driving licences. The Transport Commissioner had issued a circular to resume operations across the State and subsequently, the city offices resumed services including issuing licences, secondary licensing, vehicle registration and transfer.

The Department had temporarily shut operations after the nationwide lockdown was announced in March this year, and has resumed operations after nearly three months of inactivity. Star of Mysore visited the RTO Offices in city and found the Departments following COVID-19 guidelines strictly.

Assistant RTO Safiuddin Khan of RTO East said that RTO Offices have restricted the number of applicants to 40 percent. The two offices have fixed the quotas of each job according to the number of officers and staff available. Applicants have to book slots online — through Sarathi software — on a day-to-day basis and the slots and the time is allotted for the candidate to take the DL or LLR tests.

“The process of issuing DLs and LLRs and transferring vehicle ownership has begun with restricted numbers. Only the process of Fitness Certificate (FC) is delayed as the Centre has extended the date of validity till September,” ARTO said.

The Centre has extended the validity period of transport documents such as the driving licence, permits and registrations from its original expiry date till September. In an advisory issued by the Ministry of Road Transport and Highways, the Government asked all States and Union Territories to treat all documents related to the Motor Vehicles Act and the Central Motor Vehicles Rules as valid till September 30.

Before the COVID pandemic, each day over 100 to 120 candidates from both the RTO East and RTO West used to take the driving test at the Automated Driving Test Track at RTO East. Now, the number has been reduced to 80. “Here too, the number of candidates is reduced as many do not turn up for the tests due to virus scare,” the ARTO added.

Candidates without masks are not allowed to appear for the tests while for DL test, the Transport Department officials have ensured sanitisation of the vehicle before the test. Apart from reducing quotas for DL and LLR test, the Department has also altered seating arrangements and kept at least one or two seats empty between two candidates.

“We are strictly following social distance norms and this include the process of taking photos for LLRs and DLs. In the earlier system, the candidate and the officer who took his photos came face-to-face. Now to avoid close contact, the camera has been fitted to a window and the photos are clicked,” said   K.S. Soundarya, RTO East.

Thermal screening at every step

However, the new online system is a disadvantage for computer illiterates who have to fall back on agents to book a slot. “Usually the slots open at 9 am and are closed within seconds. Again we have to re-apply or pay the agent money to book a slot,” said Subhash, a resident of Vijayanagar who has tried booking slots at least 5 times.

The online slot booking is a disadvantage for driving schools in Mysuru. Arjun, manager of Aishwarya Driving School told SOM that limited slots daily for DL and LLR tests has made them to reduce the number of candidates. The online test will be conducted once the officials complete the arrangements in Sarathi software for driving tests.

“The slots are taken within seconds and this has resulted in loss of revenue to the RTO. Now that there is a pandemic situation, we can’t do much. Hope things will get better in the future,” he said.

READ ALSO  How does Mysuru look during a lockdown? Take a look

Apart from ensuring social distance at the RTO Offices and the Automated Driving Test Track, the RTO East has plans to provide shelter for candidates when they stand in a queue outside the Automated Track. At present, candidates are forced to stand in the open outside the testing centre building under hot sun or under rain. “We are planning to construct shelter rows outside the building so that candidates waiting for their turn are protected from sun and rain,” RTO Soundarya said.