Mysuru: With Mysuru striving hard to go clean and green, Pradeep Kumar, who set an example by cleaning and painting the walls near his house on Venkatalingaiah Layout near the Mysore Dairy on Mysuru-Bannur Road, has now extended his contribution to the entire street. And this time, he has painted the walls with the theme of rural India and its rustic beauty.

It may be recalled, Star of Mysore, on Jan. 8, had published a report “A beautified street that we can call a home” highlighting Pradeep’s love, or call it passion, to keep his surroundings clean. Pradeep Kumar, the proprietor of Jain Hardware and Plywood Shop on Ashoka Road, took the initiative of cleaning (all by himself) and beautifying the street where his house is located. Pradeep cleaned the street and gave it a unique look as he has got the walls of the street painted with various themes of forest, heritage, birds, wildlife, tribal life etc.

Not stopping at this, Pradeep Kumar has continued his “painting the town red” initiative and this time he has literally brought a rural setting to a street that is dominated by buildings and big Kalyana Mantaps. He had kept a 40-metre wall vacant on the road and wanted to do something different. He has ended his suspense now.

“I had kept the last part of the wall empty and was planning to surprise others with a special theme. I wanted to give the wall a touch of rural India and rural games,” he told Star of Mysore. 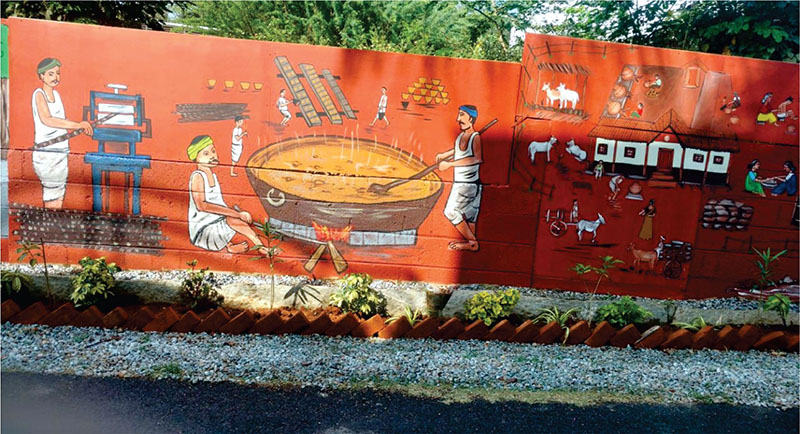 The street now has paintings of birds, animals, wildlife and rural games and lifestyle. He took up this task of beautification after being inspired by Swachh Bharat Abhiyan launched by Prime Minister Narendra Modi. After painting the walls, Pradeep sent a letter to Prime Minister’s Office on Dec.30 and received a response on Jan.2 asking him to submit more details about his initiative and the street.

“Now that the painting of the entire street wall is done, I will be doing a video and sending it to the Prime Minister’s Office as they have asked for complete detailing,” he said proudly.

Next, Pradeep Kumar will bring medicinal plants and add to his rich collection of plants that he has decorated all along the street.

The man, who is on a mission to make his surroundings healthy and pleasant all by himself, is definitely a role model for many in city who just crib about unclean surroundings from the comforts of their homes and plush offices.