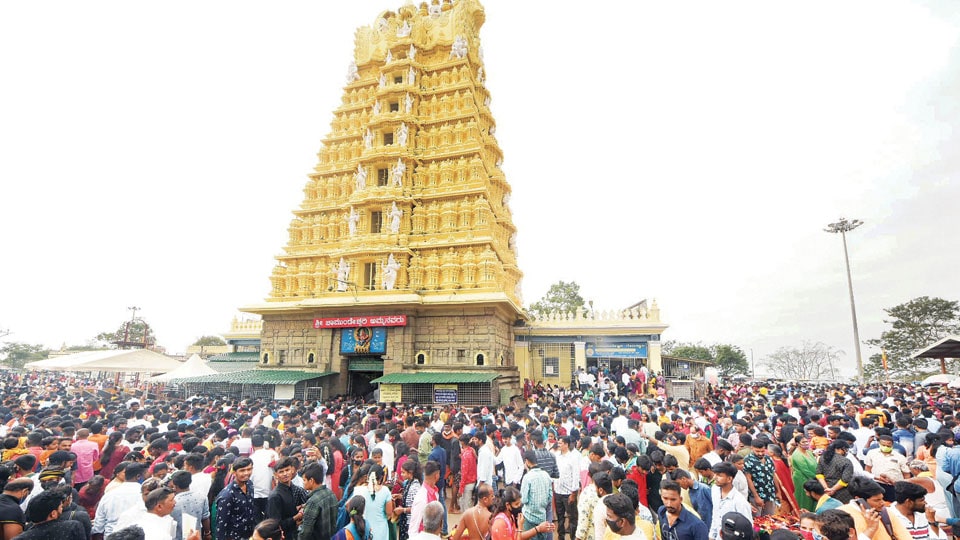 Mysore/Mysuru: Spirit and spirituality are very much a part of a Mysueran’s New Year agenda and in the absence of night-long parties and revelry in view of COVID-Omicron curbs, thousands of people headed to various temples in and around Mysuru this morning. People prayed with hopes of having a good year ahead.

Performances by artistes, DJ shows, live orchestras and dazzling displays of fireworks that usually mark the zero hour celebrations at various party hotspots were not to be seen and people compensated for it by visiting temples.

At Chamundeshwari Temple though people were less till around 8 am, crowds swelled after 9 am and thousands of them were pouring in to have a glimpse of the Goddess. For the first time, Rs. 300 special darshan ticket was printed and there was a good demand for the same. With special ticket, devotees could enter the sanctum sanctorum without standing in queues. There were Rs. 100 and Rs. 30 tickets too.

Thousands of devotees queued up at Sri Yoganarasimhaswamy Temple in Vijayanagar braving the cold. Special pujas began as early as 3 am. Temple authorities distributed two lakh ladoos and puliogare prasadam to devotees specially prepared for the occasion. As many as 70 persons were designated to distribute ladoos and prasadam.

The Srikanteshwara Temple in Nanjangud had over 25,000 devotees at 11 am and the temple authorities were expecting the crowd to touch 50,000 by evening. All the roads in and around the Temple Town were chock-a-block with slow-moving traffic. The Police had a tough time controlling the crowd.