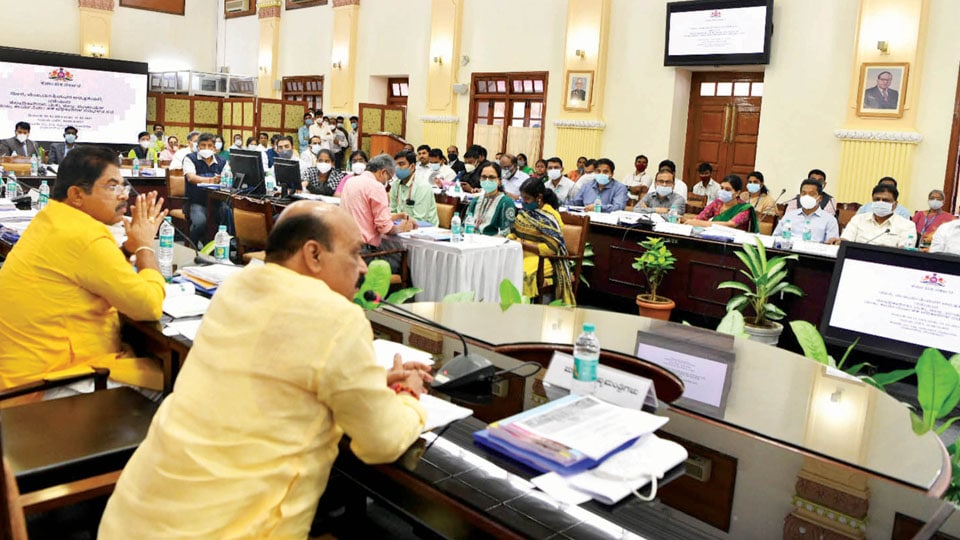 Bengaluru: Chief Minister Basavaraj Bommai yesterday urged Deputy Commissioners of districts to bring in change, instead of just thinking about it.

He asked Deputy Commissioners to work with team spirit and face the challenges unitedly to make the district administrations dynamic.

“Promptly implement the Government’s bold decisions taken to make the administration more responsive to people’s plight, work proactively in the districts to give good administration; instead of just thinking about change, take the lead to bring the change yourself,” Bommai said.

The Chief Minister was addressing the Deputy Commissioners’ meeting at Vidhana Soudha. “Leave the attitude that you are the DC or the District Magistrate and work for the welfare of the people,” he said.

Stating that the Government has proved to be alive and responsive by reaching out to the people to redress their grievances, the CM said, crop compensation has been paid within 48 hours of uploading the report in Parihara App. “It has been made possible to provide relief to 83 percent of affected farmers due to the efficiency of Deputy Commissioners,” he said, appreciating their performance.

READ ALSO  Mini Vidhana Soudha to come up at Kushalnagar

Bommai stressed the need for making the administration more responsive to take the welfare programmes to people’s doors. Revenue Minister R. Ashoka, who also addressed the meeting, said periodic progress review of development works should be held compulsorily, and the DCs should reserve at least one day in a month for encroachment clearance drive.

“In many districts, 3,000 to 5,000 revenue cases that are 10 to 15 years old are still pending. At the current rate, it may take more than four to five years to address the cases and many may not get justice,” Bommai said. To hasten the survey process in rural areas for the purpose of Podi, Bommai said the State Government will spend Rs. 20 crore to hire private drones to complete surveys.

A programme to take Government services to people’s doors in rural areas will be launched on Jan. 26 which includes issuing documents at the doors of the people. DCs should make this programme a grand success, Ashoka said.

The Chief Minister asked the Deputy Commissioners to coordinate the launch of vaccination drive for children in the age group of 15 to 18 years from Jan. 3 as per the advice of the National Technical Advisory Group on Immunisation (NTAGI) of the Government of India.

4 COMMENTS ON THIS POST To “Be people-friendly, forgo ego: Chief Minister’s pep talk to DCs”