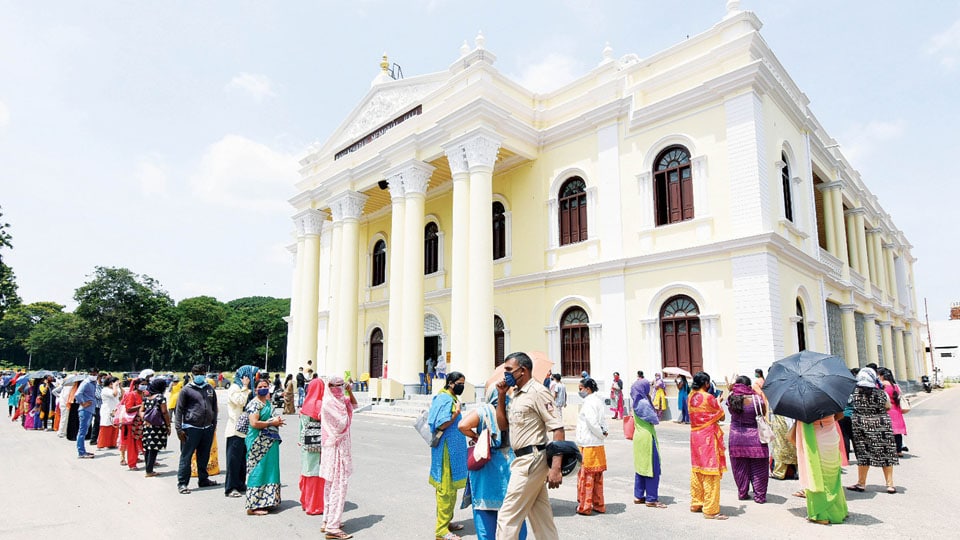 Mysore/Mysuru: People braved hot sun this morning and stood in a long queue in front of the Town Hall where Rapid Antigen Tests were being conducted to identify COVID-19 infected persons and to check the spread of the disease.

Serpentine queue was witnessed and people had come voluntarily from various parts of the city to get themselves tested. Before the tests were conducted, the contact details of the people were noted down so that they can be informed if they are carriers of the virus. Tests were being conducted by healthcare personnel wearing personal protective equipment.

As of 1 pm today, over 350 samples were collected and tested. Results of Rapid Antigen tests are immediately available and those who test positive have two options — either go for home quarantine or get admitted at any COVID Care Centre. Every day the tests will be conducted from 10 am to 3 pm.

Sero survey: Meanwhile, Seroprevalence surveys or Sero surveys will be conducted in Mysuru soon, confirmed District Health authorities. The Indian Council  of Medical Research (ICMR) has already undertaken its second national-level Sero  survey to find out the extent of the virus’ spread in the last eight months.

A team of Health Department officers and Zilla Panchayat    personnel is putting in place a plan of action to conduct the survey. This will be a random sample survey to assess the presence of antigens and antibodies present in a target population. The survey is expected to provide data to assess if there is community transmission and if the trend towards herd immunity has begun.

The survey uses serology tests to identify people in a population or community that have antibodies against an infectious disease. Antibody test results are especially important for detecting previous infections in people who had few or no symptoms. It is not known yet if having antibodies to the virus that causes COVID-19 can protect someone from getting infected again, or, if they do, how long this protection might last.

A small sample of people participating in the survey represents a larger population, which could be a community, State, or special population.

Samples would be pooled from among the general population and vulnerable sections such as Corona Warriors, including Accredited Social Health Activists (ASHA) and Anganwadi workers, doctors, nurses and other field staff.

If the Sero prevalence is low, then the peak in the number of cases is yet to come. But if the levels are more than 30 percent, it indicates that the cases will reduce in the future, said a Health Department officer.