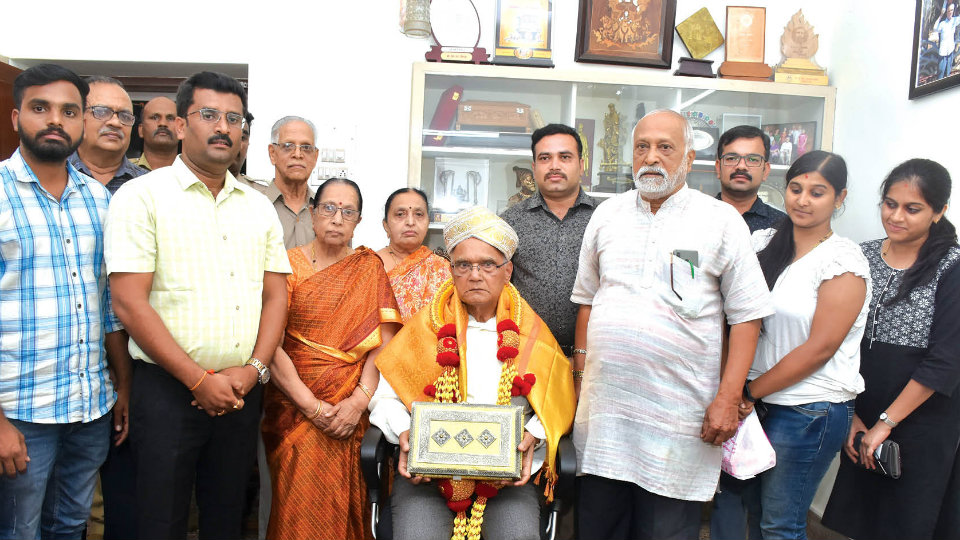 Mysuru: Veteran novelist and Saraswati Samman awardee Dr. S.L. Bhyrappa, who has been invited by the State Government to inaugurate this year’s Dasara festival was felicitated by city’s Anveshana Seva Trust at his residence in Kuvempunagar here yesterday.

Speaking after being felicitated, Dr. Bhyrappa said that the 10-day festival, apart from being Naada Habba will also boost the region’s economy and tourism.

Noting that he has been watching Dasara since 1948-49, the veteran novelist recalled that the Naada Habba was indeed a festival then when relatives from all parts used to come to Mysuru to watch the Dasara procession.

Pointing out that it was a matter of delight then to watch the Mysuru Maharaja sitting on the Golden Howdah (Ambari) atop on an elephant, Bhyrappa said that he has prayed to Goddess Chamundeshwari to bless everyone.

Stating that it was a honour for him to inaugurate the Dasara festival on Sept. 29, Bhyrappa said he was grateful for  being felicitated.

Writer Pradhana Gurudatta in his address, said that the Mysuru Maharajas continued the legacy of the over 400-year-old Dasara excellently. Pointing out that the Dasara festival had indeed become a Naada Habba with the involvement of all sections of the society, he said that it was a matter of joy that a great novelist like Bhyrappa has been invited for inaugurating the world famous Dasara event in the city.