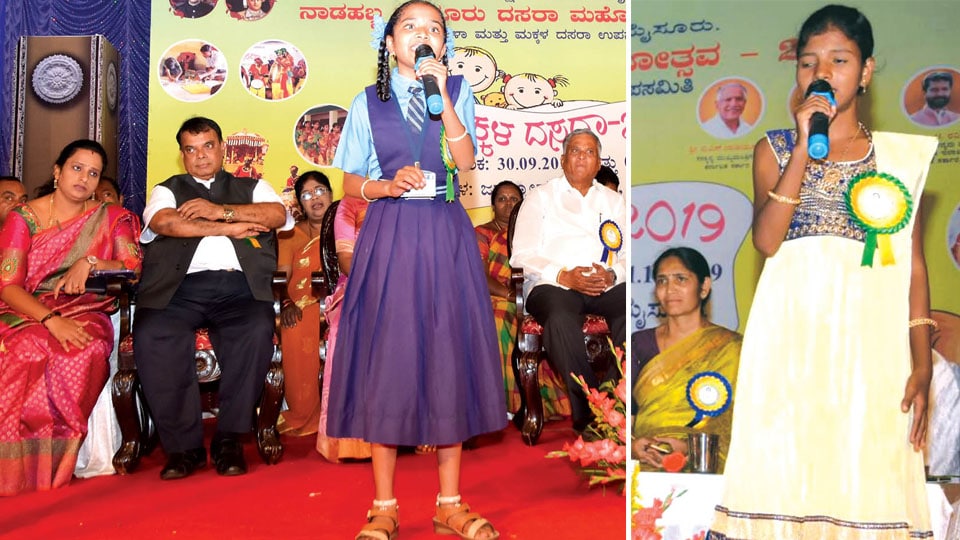 Mysuru: Child artistes of Sa Re Ga Ma Pa fame — Rubina Nadaf of Haveri, Sangeetha, a visually challenged girl from Davanagere and Nayana Nagaraj of Mysuru, mesmerised the audience with their melodious voice during the inauguration of Makkala Dasara at Jaganmohan Palace this morning.

District Minister V. Somanna, who inaugurated the two-day Makkala Dasara said that today’s children are tomorrow’s citizens and as such importance must be given for moulding their future.

Pointing out that children are nation’s wealth, Somanna said that teachers must unearth the hidden talent among them.

Asking the children to respect their parents and teachers, he called upon the authorities to give special coaching for students from backward regions.

Earlier, Somanna inaugurated stalls set up in the premises, where handicrafts, bangles, art works, pot art works, wall papers, table vases and a host of other articles prepared by children of Kasturba Gandhi Balika Vidyalayas in all taluks of the district and Specified Category Government School, Nazarbad in city are displayed.

Somanna also flagged off buses carrying children for free, from Government Schools in rural parts of the district for Dasara Darshan, as part of Grameena Makkala Dasara Darshana, which is organised for the first time.