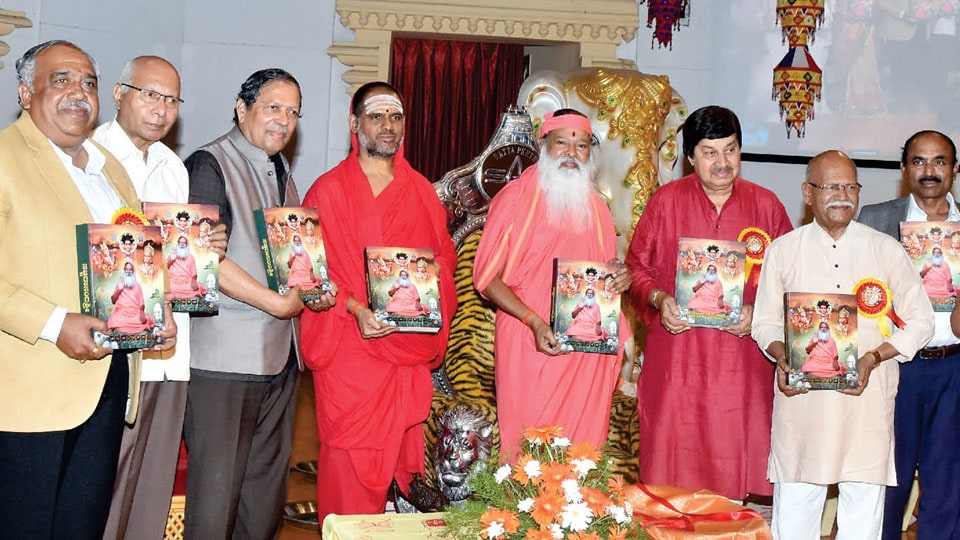 Mysuru: “Sri Ganapathy Sachchidananda Swamiji is a multi-faceted personality. His Ashrama is not restricted to any one religion or caste. His contribution is not confined to just religion but also to music, art, literature and other fields,” said former Lokayukta Justice Santosh Hegde.

He was speaking after inaugurating the Guruvanda programme during the release of the book ‘Sachchidanandashri,’ a felicitation volume on Avadootha Datta Peetha’s founder Sri Ganapathy Sachchidananda Swamiji at the Ashrama premises, here yesterday and said that he was very happy to be a part of the event which is a prelude to the Swamiji’s 77th birthday celebrations. “Let us pray that the Swamiji’s contributions to society will continue for many more years,” he added.

“I have heard the Swamiji speaking about parents abdicating their duties towards their children in the present day society which, coming from the Swamiji, speaks volumes regarding the concern he has for children. I have seen the deterioration of social values as a Lokayukta for five years. Our elders were narrating stories from the Puranas to the children and were telling them what to follow and what not to. Only because of these early lessons, it was possible for people like us to build a good life. However, in today’s world both the husband and wife go to work and when they return in the evening they bring their own problems at work back home. They will have no interest to talk about values, rights and wrongs. Hence there is so much unrest in the society today,” he said.

“As human beings we must at least have two values — contentment and humanism. When there is no contentment in life then corruption grows and the social ills will afflict the society. Hence, at least while dying one should die a human. Till now I have visited 1,076 schools and colleges and spoken to the students about my five years experience as a Lokayukta. I do not know the impact of it on the students. However, I will continue with my efforts,” said Santosh Hegde.

National award-winning Sanskrit Scholar Dr. H.V. Nagaraja Rao, who spoke about the Guruvandana volume ‘Sachchidanandashri,’ said that this was not just a book but a library in itself. In all the 22 chapters of the book, the life of Sri Ganapathy Sachchidananda Swamiji is reflected.

Including the Aasthan Poet Dr. C.P. Krishnakumar (CPK) there are 164 write-ups by 150 writers. There is a poem by poet Doddarangegowda on the Swamiji. A total of 48 women writers have been given opportunities to write. Each and every write-up in the 900-page voluminous work can be brought out as a separate book. The experts in various fields have contributed, he said.

“There are more people in the world who believe that only their religion is sacred. However, this book shows that the Saints and preachers of all religions whether Hindu, Muslim, Christian, Buddhist, Jain or Sikh speak about the value of humanism as the most sacred. This truth is revealed in the book  ‘Sachchidanandashri.’ This will be an important guide for Philosophy students. Each and every chapter teaches new things and also speaks about the life and times of the Swamiji. If this volume is there in one’s library, it is like possessing an encyclopaedia,” said Dr. Nagaraja Rao.

Mutts should not become breeding centres for terrorists: Speaking after releasing the volume ‘Sachchidanandashri,’ veteran litterateur Nadoja Prof. Hampa Nagarajaiah said that Mutts and religious centres should not turn into breeding ground for terrorists. Instead they should welcome everyone as their own and become centres of love and humanism.

“Mallaradhya and I had taken the responsibility of bringing together the Swamijis and Heads of all Mutts under one roof on a common platform in the 1970s. Even the Swamijis had agreed for the uniform placing of chairs for all the heads of the Mutts. However, two days later, the devotees of many Mutts called us and said that it is alright if the chairs are all of the same size but since our Mutt is one of the oldest our Guru’s cushioned seats must be one or two notches higher. Only then we realised that we should inculcate a sense of unity among the Swamijis. However, this is the first time I have come to Avadootha Datta Peetha and when I see the Swamiji and the atmosphere here, my mind is filled with peace and joy,”  he said.

“The size, weight and the importance of ‘Sachchidanandashri,’ is all very unique. I had got this volume 15 days back. My knowledge and awareness was enlightened after going through this small encyclopaedia. In the works that is brought out in the world of Kannada literature, this volume is going to occupy a prime space. This is a very special, rare work and everyone involved in the editorial work must be lauded for their effort,” said Prof. Hampa Nagarajaiah.

“Sri Swamiji in God’s form before us”: “After being in the presence of Sri Ganapathy Swamiji, one realises that one will be imbibed with the values that not only humans but one should love all creatures equally. If one loves the whole world then peace and laughter will engulf everyone. One will come to understand that it is human dharma that is most sacred among all beings in the world. Sri Swamiji has appeared in God’s form before us and even crores of pranams to him will be considered less. Let Sri Swamiji’s blessings be on everyone.”—Srinath, Veteran Actor

Sachchidanandashri Sri Ganapathy Swamiji
Job Racket: One more case against 2 women
She writes alphabets of 13 languages with both hands simultaneously