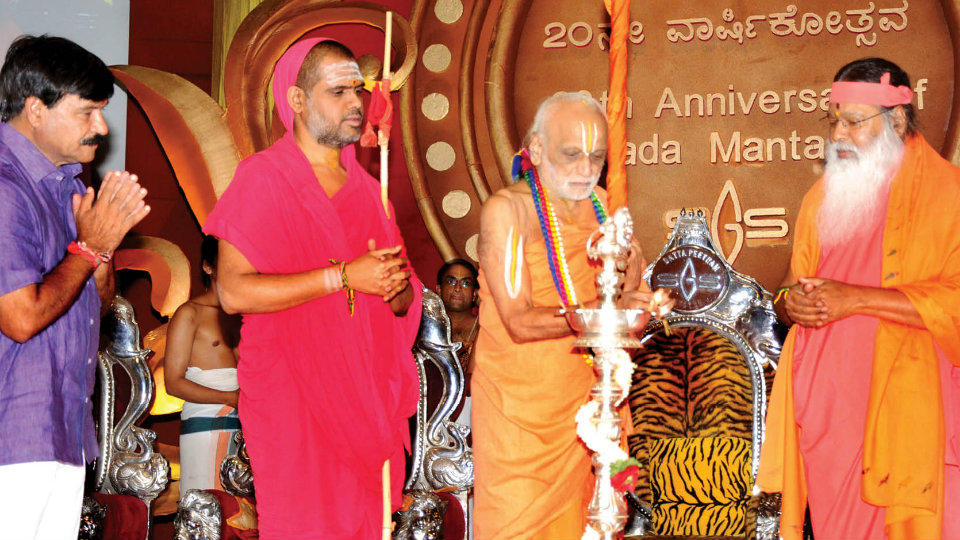 Mysuru:  “Sri Ganapathy Sachchidananda Swamiji is a Seer who has been successfully spreading the message of Hinduism through his numerous tours across the globe,” said Srimad Abhinava Vageesha Brahmatantra Swatantra Parakala Mahadeshikan of Sri Parakala Mutt, Mysuru.

He was speaking after inaugurating the 76th birthday celebrations which coincides with the 19th Brahmotsava of Sri Datta Venkateshwara Kshetra and 20th anniversary of Nada Mantapa at Nada Mantapa, here yesterday.

He said that there was a deep relationship between the Parakala Mutt and Sri Ganapathy Swamiji since many years. The Swamiji, through his personal efforts, is championing the cause of Hinduism and that too through its most sacred text — Bhagavad Gita. “Let God give him more strength to propagate the message of Gita,” said the Parakala Mutt Seer.

Former Minister and newly-elected MLA S.A. Ramdas said, “When I was in trouble, the Swamiji whom I always call Appaji, stood by me, blessed and gave me mental strength to face the problems. Only because of his support, I was able to win back the confidence of the people and came back as an MLA. After I took oath on Saturday, this is the first public function I am attending and I think it has been worth it.”

“As an MLA I am making a promise that I will visit each house in the K.R. Constituency from tomorrow itself and make a list of the people staying in rented houses. I will make all efforts to see that within the next four years, all of them will be living in their own houses. Also, I will see to it that during Swamiji’s next birthday at least 25 percent will have their own houses and he will distribute the keys to the beneficiaries,” he assured. 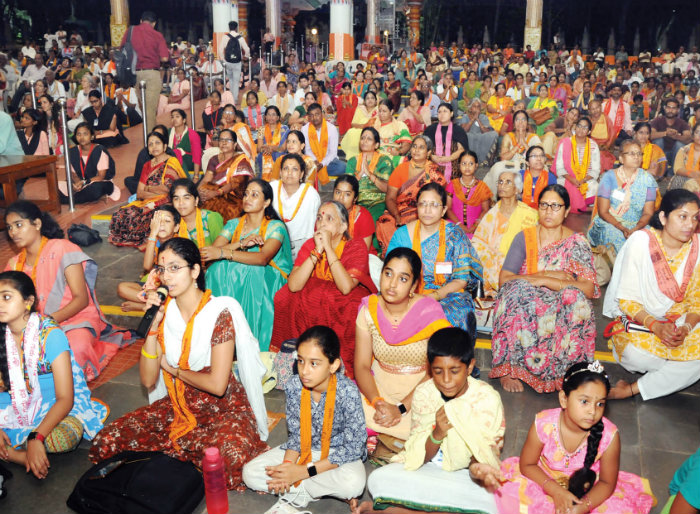 A section of the devotees during the launch of Sri Ganapathy Sachchidananda Swamiji’s 76th
birthday festivities at Sri Ganapathy Ashrama in Dattanagar yesterday.

Recalling that in 2008, the Assembly election was held during the birthday celebration of the Swamiji, he said, “At that time I was in the Ashrama itself and I got the news that I had won by a margin of 18,000 votes. Ten years later, in 2018, I have come back as MLA with the blessings of the Swamiji and the people’s confidence.”

The Swamiji, who wanted a person who can protect religion and democracy, came all the way from France and directly went to the polling booth to cast his vote. Thus, he spread the message of sacredness of voting, he said.

It was my mother and Appaji who shaped my life. The Swamji asked me not to accept defeat and runaway like a coward but instead stand up and fight. The five years I was in political hibernation, I tried to do some useful work, he recalled.

On the occasion, ‘Gurudutta Vani,’ a Marathi translation of the Swamiji’s work ‘Sukti Manjari’ by Maharashtra’s Vishalakshi, was also released.

Today (May 21) at 6.30 pm there is Hindustani vocal concert by Jayateerth Mevundi at Nada Mantapa.