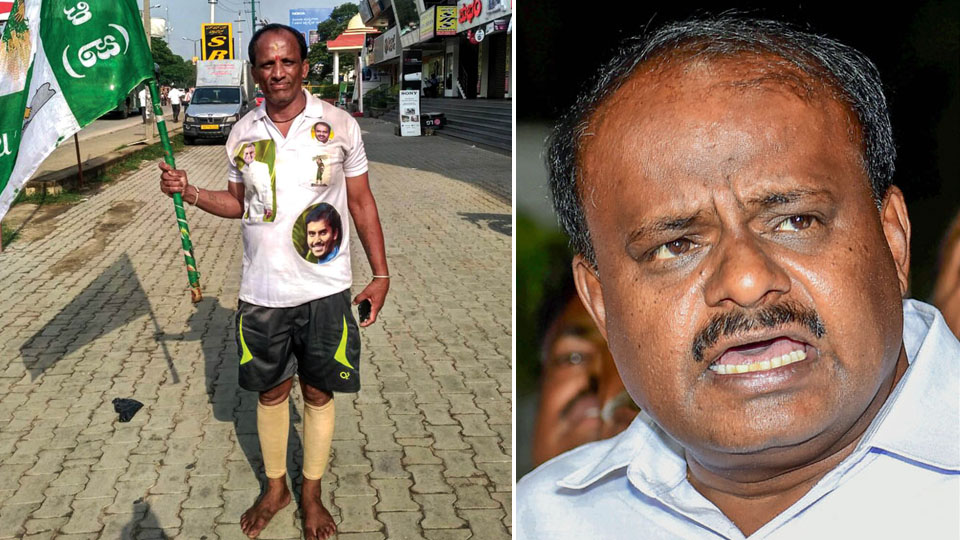 Mandya/ Mysuru: A staunch JD(S) follower, who had made a vow that if G.T. Devegowda (GTD) wins from Chamundeshwari constituency and H.D. Kumaraswamy (HDK) becomes the Chief Minister, he would walk to Tirupati, has embarked on foot to the temple town as both his wishes have come true.

Wrestler Venkatesh, 48, is the person who made the vow and is now on his way to  Tirupati to fulfil it.

Pailwan Venkatesh (as he is called), son of L. Marigowda, originally hails from Melapura village in Srirangapatna taluk and now resides in House No.140 on Hosabeedi in Hinkal village in Mysuru.

A staunch follower of JD(S), Pailwan Venkatesh had a made a wish that even this time GTD must win by a huge margin in Chamundeshwari constituency.

He had also vowed that in case of a hung Assembly in Karnataka, Kumaraswamy must emerge as the Chief Minister and if both the wishes are granted by Lord Venkateshwara, he would walk to Tirupati to fulfil his vow. Thus he embarked on a journey to Tirupati from Hinkal on Saturday on foot via Mysuru-Bengalur highway.

He was wearing a white T-shirt emblazoned with photos of HDK and GTD along with the JD(S) symbol and blue coloured shorts.

He reached Mandya yesterday morning and met JD(S) youth leaders Yoganand, Pradeep, City Club Director Rammanna and others who welcomed him with garlands.

Pailwan Venkatesh, after passing through Chennapatna, will reach Ramanagaram this evening where former MLA and wife of HDK, Anita Kumaraswamy, will greet him.

“My father will take six to seven days to reach Tirupati. After completing his vows, he will return to the city by train,” said Venkatesh’s son H.V. Girish, speaking to SOM this morning.

Pailwan Venkatesh drives an autorickshaw in his spare time while running Balaji Juice Centre in three places including Hinkal, Hootagalli and Yelwal. He is a wrestler from the Nadakusti (traditional wrestling) family. He recently won the title ‘Mandya Kesari’ at the Wrestling Tournament held there, besides bagging several other titles.

A la Dangal movie based on a true life story of wrestler Mahavir Singh Pogat, Venkatesh has also trained his two daughters to become wrestlers. The elder daughter Rani has won gold and silver medals in National Wrestling Championships. The younger daughter Radhika has also won three gold medals. His son H.V. Girish is pursuing his M.Tech in Vidyavardhaka    College of Engineering.

Venkatesh, who hails from such a family of achievers, has become the toast of the city, for his resolve to embark on foot to Tirupati to complete his vows.