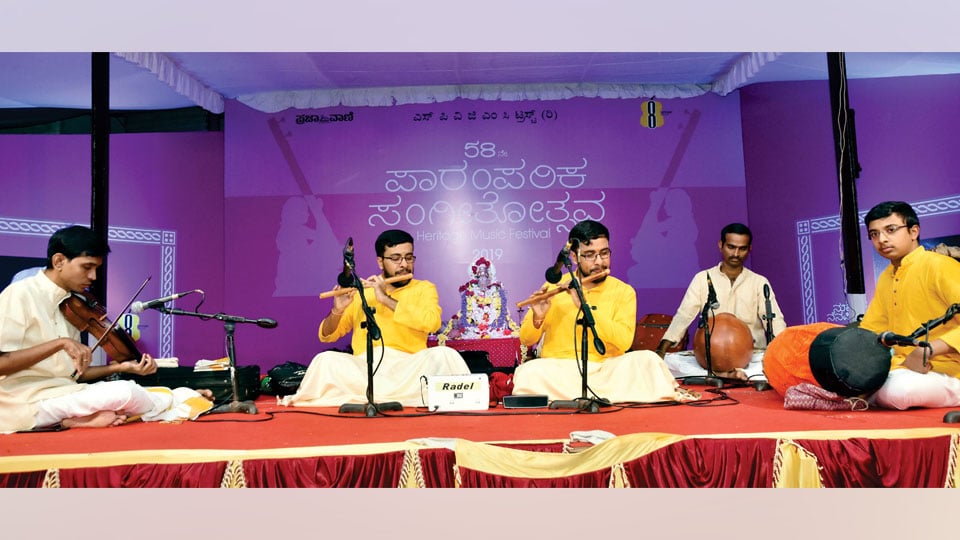 On the concluding day of the music series at 8th Cross, V.V. Mohalla, brothers Hemantha and Heramba gave a flute recital. These lads are the most promising flautists in the Karnatak music scenario today.

The twins have just graduated (BE in Information Science). They learnt flute from A.V. Prakash of Mysuru initially and have been learning under Neyveli Santana Gopalan. The brothers have adapted the ‘gayaki’ style in their playing.

Their powerful blowing style was revealed right from the beginning varna ‘Nera Nammitinayya’ in Kanada (Poochi Srinivasa Iyengar) set to Atta Tala,  which at once created a rapport with the audience.

On one hand, the twins revealed their technical mastery over the instrument in the swarakalpana of Tyagaraja’s ‘Seetapate’ in Kamach and ‘Durmarga charadhamulanu’ in Ranjani, while they displayed their aesthetics by sketching the various nuances of Ranjani ragalapana in their fluid playing. There was remarkable maturity in their alapanas, swara patterns and kriti rendering. There was clarity in enunciation, conveying the sahitya of the kritis so accurately that many a listener could be seen moving their lips in tune with their playing. In the alapana, many a time the shruti was flat but the other lad made it up with his shruti management and both creatively wove complex swara phrases.

The unhurried manner in which they presented the RTP in Kambhoji charmed one and all. The pallavi ‘Kari Kalabha Vadanam Sumukham Charanam sharanam’ was set to ‘Khanda Triputa’ tala. The kalpana swaras for the pallavi were highly laden with imaginative permutations in Trishra, Khanda and Mishra. And the ragamalika swaras were knit in Shuddha Saranga, Desh, Nata, Arabhi, Sriranjani, Mohana Kalyani, Bhairavi, Vachaspati and Kapi, winding it with a grand muktaya back in Kambhoji.

Nagai Sriram’s bowing was apt, his alapanas and swaras exhibiting his manodharma with utmost confidence. Akshay Anand, though young, has good anticipation and is aware of the text and sangatis in kritis. His taniyavartanam with S. Manjunath of Mysuru on ghata was applauded by the listeners.

Thus, the Heritage Music Festival 2019 came to an end. It was a sight to see so many music connoisseurs gather in such huge numbers here. While the elders come to enjoy the music with a spiritual year, the youngsters sit on the carpet in the front with all earnestness and credulity to learn what they can from the concerts. Kudos to Himamshu for organising the commendable event every year.

The artistes, if informed earlier, can avoid repetition of ragas and kritis as it used to be before as Kharaharapriya with ‘Chakkani Rajamarga’ and Brindavana Saranga as also The Lalgudi tillana in Desh were repeated by many in this series.