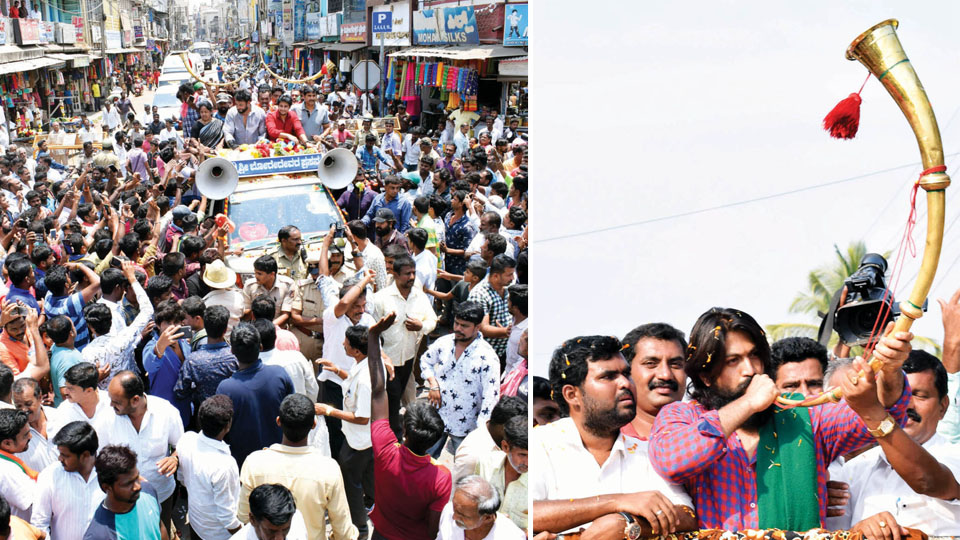 Mandya:   The Sandalwood brigade, which started its legwork for Sumalatha Ambarish, Independent candidate from Mandya, on Monday with ‘Challenging Star’ Darshan campaigning on her behalf in 20 villages of Srirangapatna taluk, continued canvassing for the actress even today.

Both the actors strongly criticised MP L.R. Shivaramegowda, who had issued a controversial statement that ‘Naidus,’ the community to which Sumalatha belongs, are out to conquer Mandya.

They took up the campaigning displaying the ‘trumpet,’ the election symbol of actress Sumalatha and making mike announcements to vote for Sumalatha, the daughter-in-law of Mandya without yielding to false propaganda of outsider tag, caste and other prejudices unleashed by her political opponents.

They publicised to vote for  serial number 20 independent candidate Sumalatha as other ‘Sumalathas’ are in the electoral fray fielded by their opponents to confuse the voters.

Addressing the people at Kiraganduru village, Yash said, “Any woman belongs to the husband’s family, after marriage. Digging the source of caste reflects the person’s narrow mind. It is wrong to involve in a personal attack.”

“I had canvassed for JD(S) during the Assembly elections. Now, I am canvassing for Sumalatha out of affection towards the late Ambarish. Despite having various opportunities, Sumalatha was adamant on contesting from Mandya and everyone should encourage her,” he added.

He alleged that some forces are preventing women entering politics and contesting election. People should reject such forces by electing Sumalatha to Parliament with a huge margin of votes.

A rousing reception was given by fans and people wherever the actors conducted road shows.

Women welcomed the actors by performing ‘arathi,’ showering flower petal, fans received them with ‘Mysore Peta’ and taking out bike rallies and procession.