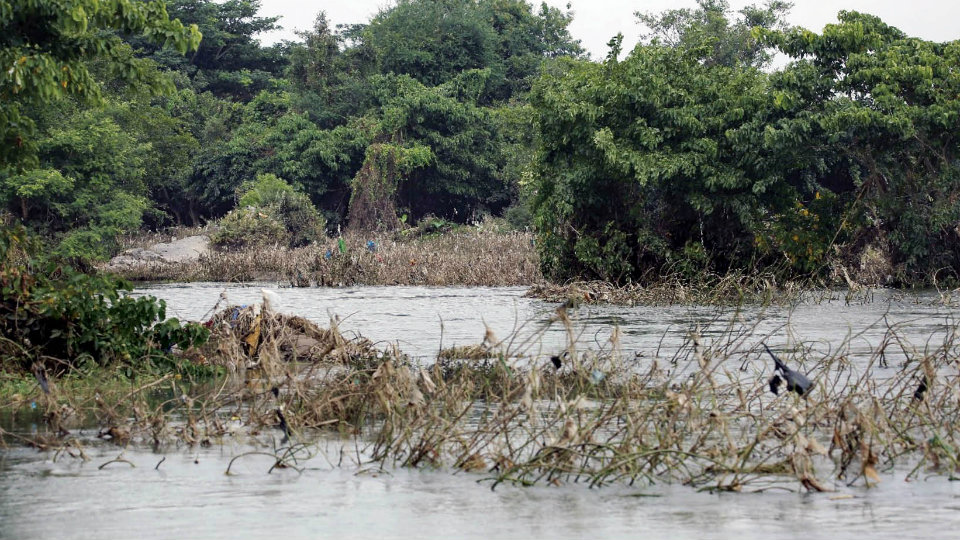 Saving the Souls at Ranganathittu!

It was distressing to read reports that thousands of birds’ nests, eggs and hatchlings at the Ranganathittu Bird Sanctuary were washed away recently when the floodgates of the KRS Dam were opened to let out the water that exceeded its storage capacity. This is not the first time that this man-made tragedy has happened and very often people feel that this can be prevented if the flood waters are released a little slowly by the people who are vested with this responsibility.

But as things stand today it is not a completely preventable problem. When there is a sudden influx of water into the reservoir there is simply no way the excess can be held back or even let out slowly to prevent flooding at the sanctuary. So blaming the officials in charge of managing the dam of being thoughtless makes no sense as they have to do the job of regulating the water level at the dam very often by taking split-second decisions, sometimes in the middle of the night. Theirs is a job of constant vigilance and great responsibility, especially during the monsoon months.

The Ranganathittu Sanctuary was established in the year 1940 by the then Maharaja of Mysore upon the advice of Dr. Salim Ali, the world famous ornithologist after he visited the spot and felt that it was a natural treasure-house that needed to be protected. However, there is no clarity over whether it was H. H. Sri Krishnaraja Wadiyar or his successor H.H. Sri Jayachamaraja Wadiyar who did this as the former passed away in the year 1940 and the latter ascended the throne immediately after him.

Ranganathittu is the largest bird sanctuary in our State with an area of about forty acres and is spread across an archipelago of six islands perennially surrounded by the waters of the Cauvery River. Along with about 30 species of its permanent residents, nearly 170 species of birds have been sighted here because this place is the haven of a large number of migratory birds that come here from distant lands like Siberia, Australia and North and South America.

In addition to bird species, these islands also abound in many mammalian and reptilian species with Indian Marsh Crocodile or Mugger being the most notable attraction to visitors. In fact, Ranganathittu has the largest population of this fresh-water crocodile in Karnataka.

In the early seventies, ever since I acquired my first SLR Camera and my Lambretta scooter and in the early eighties, it was my regular retreat in the wilderness which was actually my favourite weekend hideout. I missed out going there for six-long-years in-between when I was away from Mysuru, pursuing my medical studies at Gulbarga. While doing my post-graduation in the early eighties in Mysuru, I think I have spent as much time there with my cameras and lenses as I spent with my patients in the corridors and wards of K. R. Hospital! During those years, Ranganathittu was a pretty deserted place without any kind of restrictions on where one could or couldn’t go. I had a couple of boatmen whom I had befriended and they would be happy to transport me and my equipment to any of the islands of my choice and leave me there for as long as I wanted.

Every Sunday I would be at Ranganathittu in the company my friend Dr. Taher Assadi, who was also pursing his MD and was seriously into photography like me. And, on every Tuesday I would once again be there in the company of Dr. B. N. Ramesh, the senior resident in Medicine who later joined the CFTRI as a medical officer.

Ramesh and I would invariably volunteer to do the night duty on every Monday after the weekly OPD of our unit because that would give us half-a-day off on the forenoon of Tuesday! This half-a-day’s break used to seem worthy of enduring a sleepless night once a week, running around, like stealthy ghosts, from one block of the hospital to the other attending to emergency calls from different wards! So every Tuesday it used to be a sumptuous breakfast of steaming hot idlies topped with butter at Mylari Hotel in Nazarbad before catching the first boat to my own Treasure Island!

It is interesting to note that though there is a much larger group of similar islands slightly upstream, for some inexplicable reason that to me seems worthy of looking into, the birds seem to prefer roosting only on the six islands of Ranganathittu. Although most officials of our Irrigation and Forest Departments say that there is no way of preventing the flooding of Ranganathittu and the consequent washing away of the nestlings there whenever water is suddenly released from the KR Sagar Dam, I feel that we can find ways and means of mitigating this problem to a significant extent if we give a serious thought to it.

If you look at a map of the place you will find that a very large island is also a part of the other five much smaller islands that make up the sanctuary. I do not know what lies on this large island now as no one is allowed to step on it. But way back in the early seventies I have explored it extensively on foot and I used to see some agricultural activity going on there especially on its Northern side. I am told that now all the islands including the largest one of them have been included into the sanctuary and are a restricted zone.

But it may be noted here that it is only the southern edge of this large island which is home to the roosting birds. The widest part or the main body of the Cauvery River flows along the northern border of this island with only a narrow tract of it flowing along its southern border engulfing the other smaller islands there. So a great deal of the river water flows through its northern body. But because water finds its own level it rises equally on all sides of all the islands and floods the sanctuary, sometimes destroying the nesting areas at high flood level.

Now if a small weir is built across the smaller Southern body of the river  from its right bank to the Western edge of this large island, it can divert the flood waters towards the larger body of the river and keep the water levels low in the sanctuary proper. This suggestion and its practicality need to be discussed by a team of engineering experts who can then decide if it is pragmatic. My second suggestion is to trim away just the lowermost branches of all the vegetation that grows on all the islands of the sanctuary every summer before the nesting season begins. This will ensure that the unwary birds do not build their nest close to the high flood level of the area and put their eggs and nestlings at risk.

Of course, this measure cannot protect many of the ground-nesting bird species like River Terns, Stone Plovers, Lapwings, Swifts and Swallows which abound in the place. My third suggestion which can save even the ground-nesting birds is to build a weir or spillway across the entire width of the river a little downstream from the sanctuary so that its small height keeps an artificially high level of water all round the year that almost matches the highest flood level so that all species of birds build their nests only in the safe areas. The height of this check dam need not be very great as the difference between the lowest level of water and its highest-flood level at the sanctuary is never more than four feet.

I’m sure that many of my readers, nature lovers and experts in this field may have some more suggestions to solve this problem which now torments the denizens of Ranganathittu. If we can form a think tank that can co-ordinate with the government agencies concerned, I’m hopeful that we will all see a solution to this painful problem before the Cauvery sees its next flood !