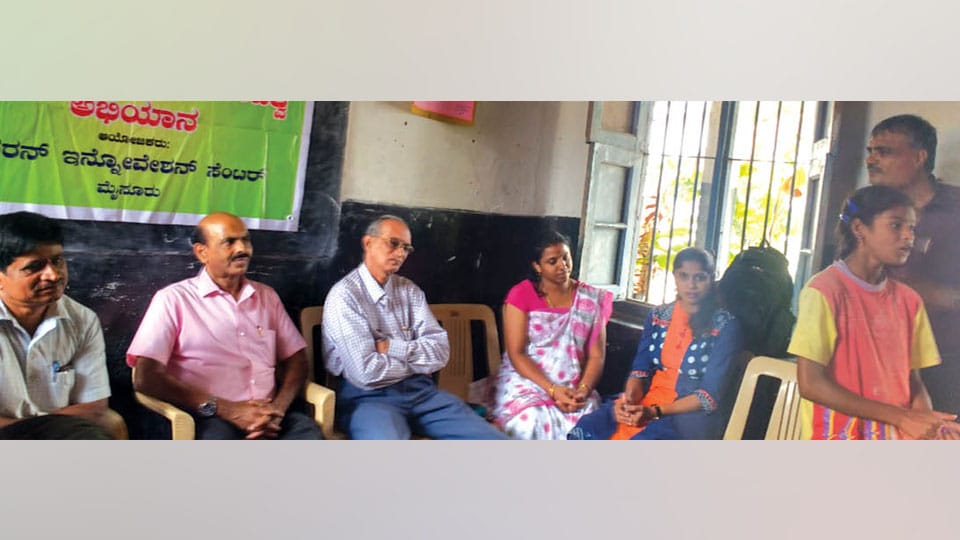 Mysuru: The campaign on cleanliness and hygiene for school children for the academic year 2018-19 by Schevaran Innovation Centre (SIC) of Schevaran Laboratories Pvt. Ltd. at Hebbal Industrial Area in city was inaugurated at a function organised at the  Government Higher Primary School (next to Railway Choultry) in Yadavagiri here recently.

Speaking on the occasion, Dr. T.N. Bhavanishankar, Director of SIC, said that cleanliness and hygiene should be inculcated in young children from school days itself so that it becomes a lifetime habit which will help in building a clean and healthy nation. During his interactive talk, Dr. Bhavanishankar expressed concern about the standard of cleanliness and hygiene in our country as against that prevails in several other countries which he had visited in person on several occasions.

Dr. Bhavanishankar announced that two students who practice best hygiene would be rewarded with a prize at the end of the year and thanked the Head Master and the school staff for their support to conduct the programme.

Dr. M.C. Varadaraj, Advisor, SIC, told the students about harmful microorganisms and the difficulty in controlling them as they are not visible to naked eyes which requires special disinfectant product to control them which Schevaran is manufacturing.

During the interaction with students, Radhika, an eighth standard student, explained about Swachh Bharat Abhiyan and Vinayaka, a 7th standard student, comprehended well about what has been spoken by the two speakers. Savitha, an 8th standard girl, called upon the students to practice cleanliness and hygiene irrespective of getting the prize announced by SIC.

Kemparaju, Head Master of the School, who presided over the function, thanked the Schevaran Innovation Centre for the noble initiative and selecting their school for this programme.  Later, SIC Research Associates Vinutha and Hemalatha, distributed the Schevaran Hygiene Kit to the students which contained toothpaste, brush, bath soap, detergent cake, liquid hand wash and a nail cutter and demonstrated how to use the products in the kit.