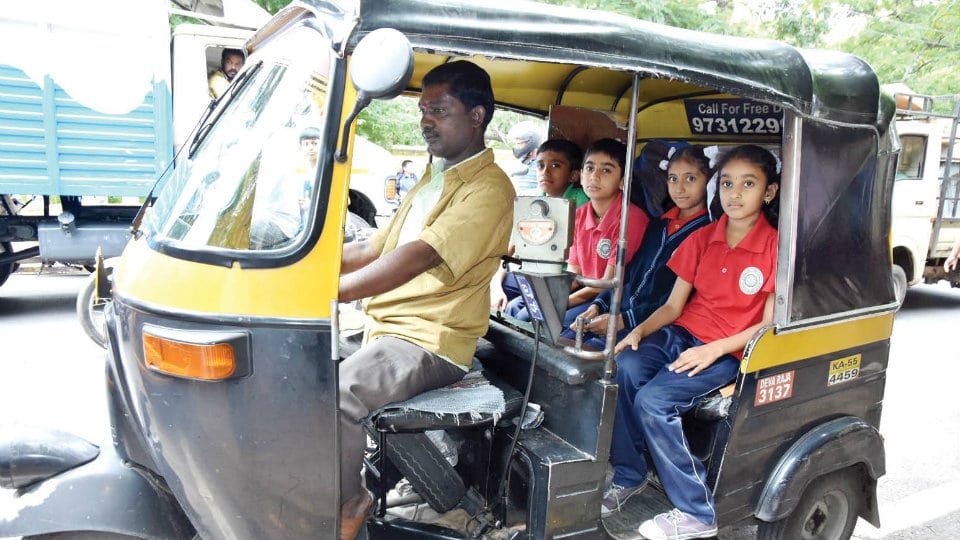 Mysuru:  Refusing to follow the Supreme Court order that allows autos to carry only four children above the age of 12 and five if the children are below 12 and Omni Vans to carry six or seven children, the Mysuru City Private School Autorickshaws and Vans Owners and Drivers Association will launch an indefinite stir in  city from July 15 (Monday).

Speaking to SOM this morning, Association Convenor Suresh said that there were over 3,500 autos and Maruti Omni Vans ferrying children  to different schools daily.

Pointing out that they have been in this business for over two decades and making a living out of it, Suresh said that now the Police and RTO Officials have begun penalising them for carrying children beyond the number stipulated by the Supreme Court.

Maintaining that they used to carry eight children in autos and 12 in vans in the past which worked out for them, he said now the SC regulation has made their life miserable.

Noting that when this problem surfaced last year, the DC had convened a meeting in which autos were allowed to carry 8 children and vans 12 children, he said that since the beginning of this academic year, the Police and  RTO have launched a drive against them, during which the drivers are heavily penalised for overloading and their DLs impounded for third time violation, which is unfair.

Highlighting that they can do business for only 10 months in a year as the Schools will be closed 2 months as holidays, Suresh said that with the strict enforcement of the SC order, they are finding it very difficult.

Claiming that they had no alternative other than launching an indefinite stir, Suresh appealed the authorities to relax the regulations and thus come to their rescue.

He further said that the parents of the school children have been informed about the indefinite stir well in advance.