Home » News » Search for Talacauvery landslide victims given up 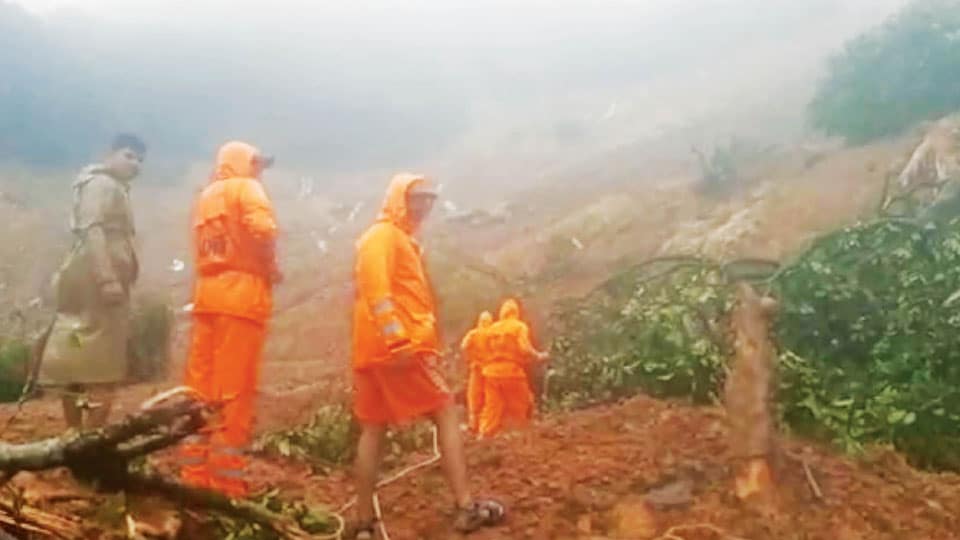 Search for Talacauvery landslide victims given up

Madikeri: After a frantic search for 16 days, search teams have given up the search for two persons who are buried deep underneath the debris of a massive landslide at Talacauvery. Five persons, including Narayanachar, the Chief Priest of Talacauvery, were buried alive after a portion of Gajagiri Hill, adjoining Brahmagiri Hill, at Talacauvery collapsed on two houses on the midnight of Aug.5.

On Aug. 8, the rescue team could recover the body of Ananda Theertha near their house. Later, decomposed bodies of two more persons, Narayanachar and Ravikiran Bhat, were traced near Nagatheertha, two kilometres away from landslide site.

The search was conducted till six kilometres from the landslide site to nearby Korangala village. Four excavators and over 150 personnel had been deployed by the State Government.

Pulling out the bodies had posed a challenge to the rescue teams due to difficult mountainous terrain and hostile weather conditions. Even after 16 days of massive search operations, bodies of Shantha Achar and Srinivas Bhat could not be traced.

Rescue personnel could only find household items belonging to the family including identity card and PAN card of Srinivas Bhat and a bag used by Shantha Achar. After discussing with the family members as well as MLA K.G. Bopaiah, Kodagu Deputy Commissioner Annies Kanmani Joy took a decision to end the search.

In 2018, Kodagu district had witnessed worst landslides. Due to landslides and flash floods that occurred on Aug. 17, 2018 near Jodupala village, a 15-year-old girl Manjula went missing. Even after a month-long search operation, her body could not be traced.

In 2019, on Varamahalakshmi festival day (Aug. 9) a massive landslide in Thora village in Virajpet taluk had brought down the Manipare hillock, killing four persons from two families including a pregnant woman. Rescue operations were carried out for 23 days but the bodies of missing persons could not be traced.

Now, this year too, bodies of two missing persons could not be traced and they have joined the list of persons permanently missing. Only trees and vegetation washed away were found but not human bodies.

Kodagu DC and senior Police officials have submitted a report to the State Government about the rescue operations at the landslide site including day-to-day activities, number of persons and equipment involved, names of missing persons and their belongings and other such details. The DC has requested the State Government to consider this as a special case and sanction compensation to the families of missing persons.