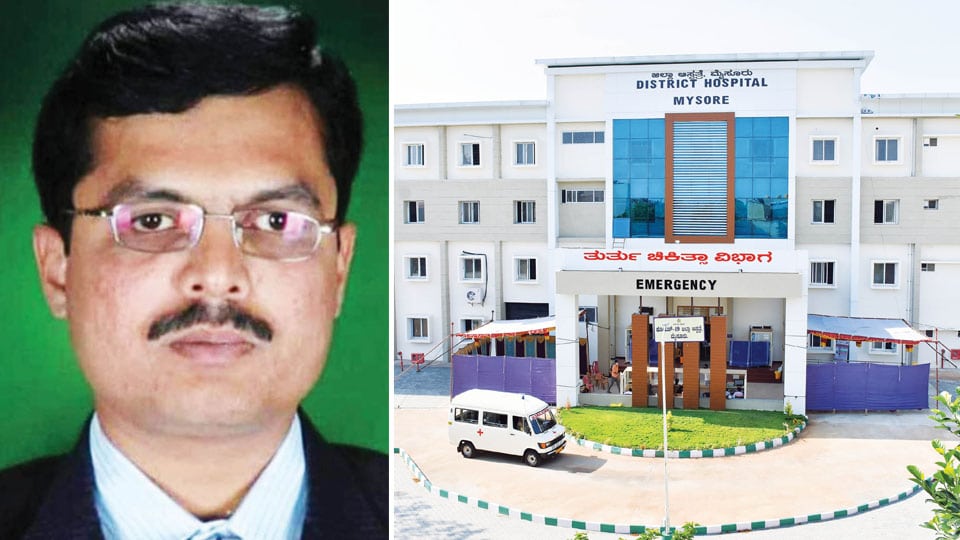 To resume duty from tomorrow

Mysore/Mysuru: The State-wide protest by doctors over the suicide of Nanjangud Taluk Health Officer Dr. S.R. Nagendra has been withdrawn following the decision by the State unit of Karnataka Government Medical Officers Association. The Mysuru unit of the Association too has withdrawn from the strike and doctors will report to work from tomorrow (Aug.24).

Following the suicide, testing of people for COVID-19 has come to a halt since last Friday. Also, there has been no COVID reporting mechanism from Mysuru as doctors were on strike.

Dr. Nagendra, a 43-year-old Taluk Health Officer (THO) at Nanjangud, died by suicide on Thursday due to alleged harassment by Zilla Panchayat CEO Prashant Kumar Mishra. Dr. Nagendra was found hanging at his quarters in Alanahalli where he had been staying alone. Nagendra’s family was residing in another area in Mysuru district and he chose to stay alone out of fear of contracting the virus and spreading it.

Doctors claimed that Mishra was arrogant and abusive, and that he had set COVID-19 test targets for all that were impossible to achieve because of a huge resource crunch. They alleged that the officer used to abuse the deceased doctor and he ended his life as he was unable to take this humiliation beyond a point. Doctors alleged “persecution” of Dr. Nagendra, who was on COVID-19 duty for over five months, and claimed that he was under pressure to ramp up testing in the taluk.

Prashanth Kumar Mishra has now been transferred without a posting and Mysuru Deputy Commissioner Abhiram G. Sankar has been given the Additional Charge of ZP CEO.

Speaking to reporters in city this morning, Karnataka Government Medical Officers Association State Vice-President Dr. Devi Anand said that the Association has imposed certain conditions for the withdrawal of the strike.

Devi Anand, who is also the President of Mysuru District Karnataka Government Medical Officers Association, said that Prashanth Kumar Mishra’s transfer must be revoked and he must be placed under immediate suspension, pending enquiry.

“Chief Minister B.S. Yediyurappa has asked the Regional Commissioner, Mysuru, to conduct the enquiry and submit the report to the Government within a week. We will report to work from tomorrow wearing black arm bands till the report is submitted,” he said.

The other conditions laid by the Association are the appointment of Health Department Medical Officers as COVID-19 Nodal Officers.

“IAS and IPS officers have no knowledge about the disease and they are unaware of ground realities. They are obsessed with numbers and this leads to harassment of doctors if targets are not achieved. The Health Department has senior doctors and they must be appointed as Nodal Officers,” Dr. Devi Anand said.

He further said that there is a severe shortage of doctors, lab technicians and other COVID Warriors and the existing personnel are working without leave since the last six months. “The Government must immediately appoint doctors and lab technicians on contract basis. This will decrease the workload and work pressure,” he said.

The Police said that the case was registered on a complaint from Dr. Nagendra’s father Ramakrishna. He alleged in his plaint that Mishra had set additional targets for his son, who had been doing extra COVID-19 related work since January, and threatened to book him under the National Disaster Management Act if he did not meet it.

Nagendra had also approached his higher-ups to supply essential materials, but to no avail, his father said. He alleged that due to this stress brought on by Mishra, his son committed suicide on the intervening of Aug. 19 and Aug. 20 by hanging himself.