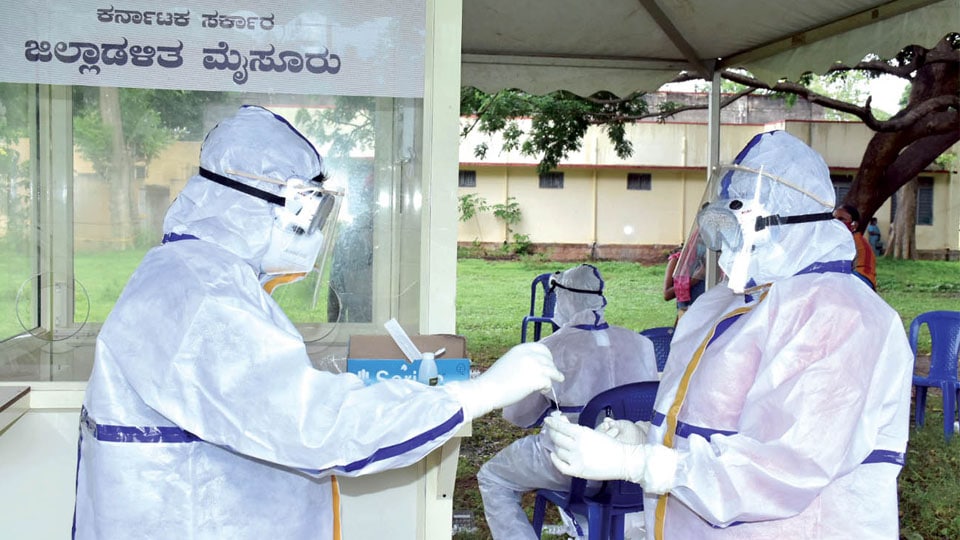 Mysore/Mysuru: Seeking fulfilment of various demands, the Karnataka Government Medical Officers Association (KGMOA) has decided to stop sharing of COVID and Non-COVID reports with the Government effective from today.

The doctors are seeking fulfilment of long-standing demands like Ending pay disparity; Regularisation of all contract doctors who have completed three years of service; Security for doctors and other medical staff at work-place, among others.

The Executive Committee of KGMOA, which met at Bengaluru on Saturday, decided to submit a memorandum to Deputy Commissioners (DCs) of all districts on Sept. 14. The memorandum says: “The members of KGMOA would not submit any online or offline reports from Sept. 14 nor participate in any meetings of the DC, District Health Officer (DHO) or Health Department, whether offline or online. We will wait for one week.”

The memorandum further said that in case of no response from the Government, all services except emergency services will be stopped from Sept.21.

Giving an ultimatum to the Government, the KGMOA has also warned that a Bengaluru Chalo would be taken out on Sept.21 after stopping all non-emergency services, if the Government fails to respond to their demands by then.

The doctors will assemble at Anand Rao Circle in Bengaluru, where a demonstration will be held in front of the Health and Family Welfare Department.

The KGMOA said, currently doctors attached to the Medical Education Department are being paid according to AICTE (All India Council for Technical Education) scale. While an MBBS doctor on AICTE scale gets about Rs. 1 lakh a month, a Health Department doctor gets less than Rs.70,000, according to KGMOA, which has sought an end to this pay disparity.

Clarifying that doctors will continue conduct of COVID-19 tests as usual, he said, however, they will not submit COVID as well as Non-COVID updates to the Government. This ‘Non Co-operation’ will continue till the Government concedes the demands of Health Department doctors, he said and added that all non-emergency medical services will be stopped from Sept.21 if the Government does not act by then.

It is learnt that the information blockade by Health and Family Welfare Department doctors applies to all other Government programmes such as Immunisation, Tuberculosis and Leprosy Eradication Drives as well.

In the wake of Government doctors going for information blockade starting from today, it is pertinent to mention here that Medical Officers of Mysuru District had not shared any reports with the Government for four days after Nanjangud Taluk Health Officer (THO) Dr. S.R. Nagendra ended his life last month (Aug.20) alleging harassment by seniors officers of the District Administration.

With no updates, all statistics pertaining to COVID-19 cases in Mysuru District drew a blank for four days when doctors went on a strike seeking justice for  Dr. Nagendra’s suicidal death.

Now, with doctors going for a Statewide information blockade, the statistics related to both COVID and Non-COVID cases will not be available with the Government from today.