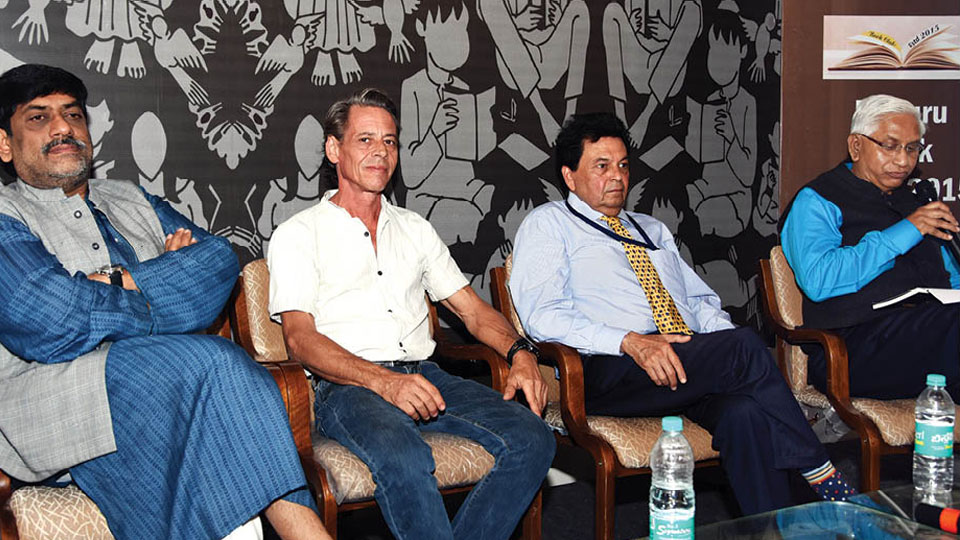 This session also was one of the eagerly awaited ones as it was about our own city titled “A class apart – Heritage of the Royal City” in which the panellists included R.G. Singh, Secretary of Ramsons Kala Pratishtana, Eric Sakellaropoulous, an inlay expert with his own factory and Michael Ludgrove, who is curating art in the Mysore and Bangalore Palaces. The session was moderated by senior journalist N. Niranjan Nikam.

Michael, who has experience working with the auction house Christie’s, talked about the collections and then shared how the late scion Srikanta Datta Narasimharaja Wadiyar wanted to open an auction house in India along the lines of Sotheby’s and Christie’s. Then he said how Pramoda Devi Wadiyar was restoring the Jaganmohan Palace to its past glory giving attention to every detail and his own expertise in doing the documentation of the art objects.

Eric Sakellaropoulous, the half-Greek-French-Canadian, an expert practicing marquetry or inlay work at his factory in Bannimantap, through his power-point presentation, showed how he is blending the modern with the traditional, using the graphic designs and also doing drawings by hand. The mesmerising works that he has done was keenly watched by the packed audience in Angana.

Then it was the turn of R.G. Singh who made a presentation based on his booklet, “Mysore Palace-Celebrating a century.” He took the eager audience through the hundred or more years history with special focus on Dowager Maharani Vani Vilas Sannidhana and her contributions in building the magnificent Mysore Palace where earlier a wooden Palace had stood and which got burnt due to an accidental fire during a wedding.

READ ALSO  "PM Modi is not a person, he is an institution"

The black and white photographs of the earlier era which he credited to have sourced from the State Archives, tell its own tales. He explained how there were three other Palaces before this final one was built and how the township which existed inside the Palace Fort was vacated with all the dwellers being paid due compensation.