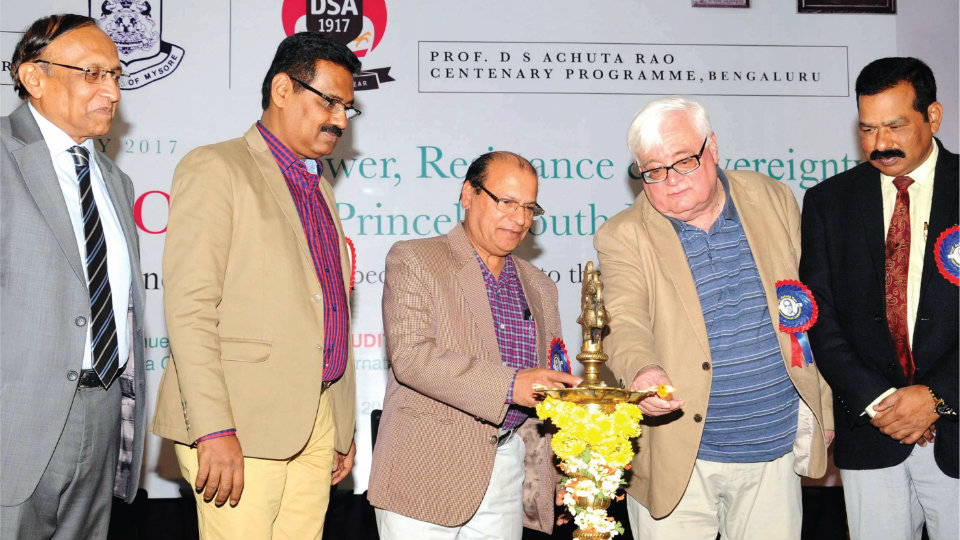 A two-day Prof. Achuta Rao Memorial International Seminar on ‘Power, Resistance and Sovereignty in Princely South India’ (with special reference to the transfer of power) began at the Rani Bahadur Auditorium, BN Bahadur Institute of Management Studies in city this morning.

The event is being organised under the joint auspices of the Department of Studies in History, University of Mysore and Prof. D.S. Achuta Rao Centenary Programme, Bengaluru. The seminar is a being held as part of the centenary celebrations of Prof. Achuta Rao, who served as a History lecturer in Maharaja’s College in city from 1950 to 1960 and then as a Professor at Manasagangothri till his death in 1965.

The key-note address on “The Princely States and the making of Indian Modernity” at the event was delivered by Prof. David Washbrook, a Fellow of Trinity College, Cambridge University. David also taught at Warwick, Oxford and Harvard Universities and his special interest is South India between 18th and 21st centuries on which he has published extensively.

Addressing the gathering, Prof. Washbrook said that the Princely States have focused on struggle against the British rule. “In education, public health, industry and commerce, certain of the Princely States (notably, Mysore, Travancore, Baroda and even Hyderabad) have led the country in social development and put backwardness and stagnation of British India to shame,” he said.

“The Indian National Congress ignored the Princely States till the 1930s and then subsumed them under a programme designed to obliterate their ‘difference’. The difficult circumstances of partition and accession also made post-independent India instinctively hostile to the traces of princely privilege and power. Reviled as feudal relics, India’s Maharajas were meant to fade into history and the societies over which they ruled to blend into a single, homogeneous and continuous national modernity,” Prof. David said.

After 1857, princely India may have played little public role in the political struggle against colonial rule. They left lasting legacies and the erstwhile princely cities of Bengaluru and Vadodara were leading centres of science and industry today and Thiruvananthapuram (along with the rest of Kerala) is a pioneer of Indian medical practice, he said.