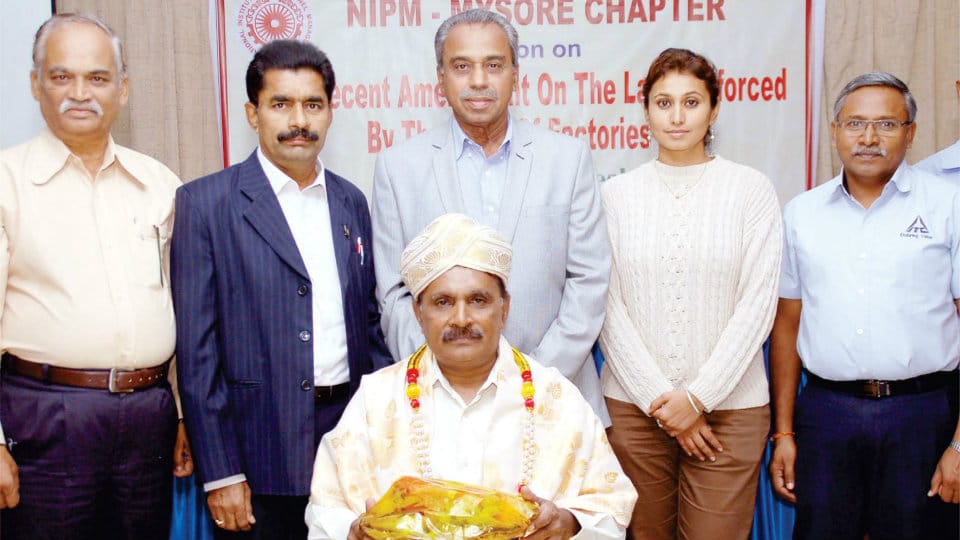 Mysuru: A Session on ‘Recent amendment to Karnataka Factories Rules 1969’ was organised by National Institute of Personnel Management (NIPM), Mysuru Chapter, at a Hotel in city recently. The programme was addressed by D.C. Jagadeesh, Deputy Director of Factories and Boilers, Mysore Division.

Jagadeesh gave a detailed presentation on Factories Act – 1948 & Karnataka Rules 1969. He highlighted about the 120 sections, 11 chapters and 3 schedules of the Act. The session included discussions on several schemes and Acts such as The Karnataka State Factories Self Certification Scheme 2016, Classification  of Industries  to Streamline  and Simplify the Inspection System, The Karnataka  Factories (Safety Audit) Rules 2016, The Maternity Amendment to the Payment of Wages Act, 1936 Benefit (Amendment) Act, 2017, The Karnataka Factories (Amendment) Rules 2016, Amendment to the Child  & Adolescent Labour (Prohibition and Regulation) Act, 1986, etc.

Jagadeesh was also felicitated for being promoted as Joint Director of Factories & Boilers, Bellary Division.

Subramanian, NIPM member, proposed a vote of thanks.  CEOs, HRs, administrators and safety department heads and officers of several industries attended the programme.