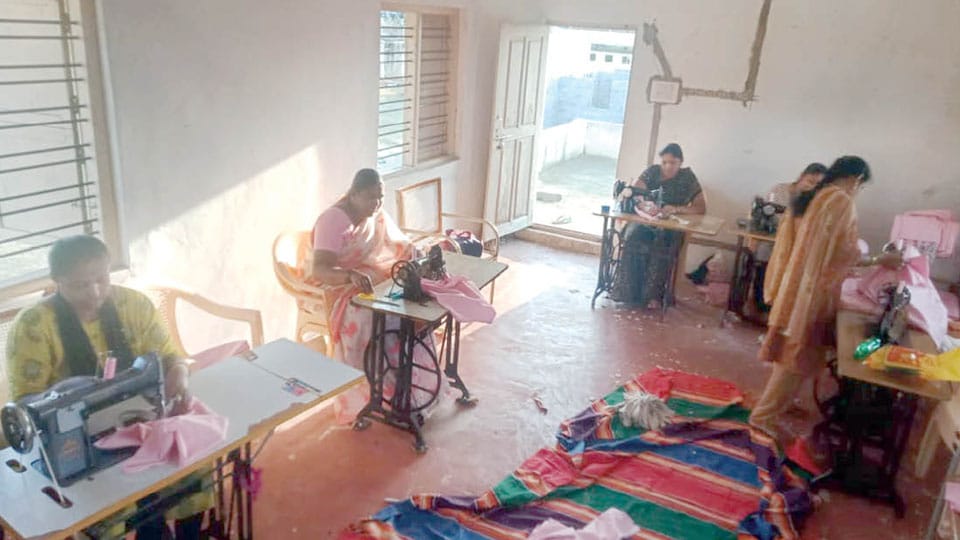 Sewing success in times of COVID-19

Strict enforcement of plastic ban will commence from tomorrow (Apr. 5) in Mysuru. The Mysuru City Corporation (MCC) officials have also issued warning to the shopkeepers not to sell the banned single-use plastic items in future, failing which stern action would be initiated against errant shopkeepers.

Meanwhile, in an effort to curb plastic bag usage, the District Administration is all set to distribute 16 lakh cloth bags. As part of this endeavour, women have shouldered the responsibility of stitching cloth bags of 5-kg and 10-kg capacity.

The Administration has already purchased the cloth necessary for stitching cloth bags from Handlooms and Khadi Board. Nearly 800 women affiliated to various Self Help Groups (SHGs), under Sanjivini Scheme at Taluk Panchayat (TP) and Zilla Panchayat (ZP) limits in the district, have already started to stitch these bags.

SHGs will get Rs. 15 per bag. If stitching cost is included, the District Administration will be spending a total of Rs. 80 to 85 for two bags. Members of SHGs have already started working on this ambitious project from Apr. 1 and are stitching nearly 40,000 to 50,000 bags per day.

Two years ago, MCC had banned usage of single-use plastic in city. Over the last few years, MCC officials have been conducting raids on a regular basis and seizing banned plastic materials. Now, ‘Shun plastic bag and Use cloth bag’ campaign has come to the forefront again.

“Strict enforcement of plastic ban will commence from Apr.5 in Mysuru. As an alternative, we are planning to distribute cloth bags to each household. Initially, when we insisted citizens to segregate dry and wet waste at their homes, there was poor response. After we started distributing separate dustbins, there seemed to be some improvement. Similarly, by distributing cloth bags, I think we can effectively implement single-use plastic ban,” MCC Commissioner Shilpa Nag told SOM.