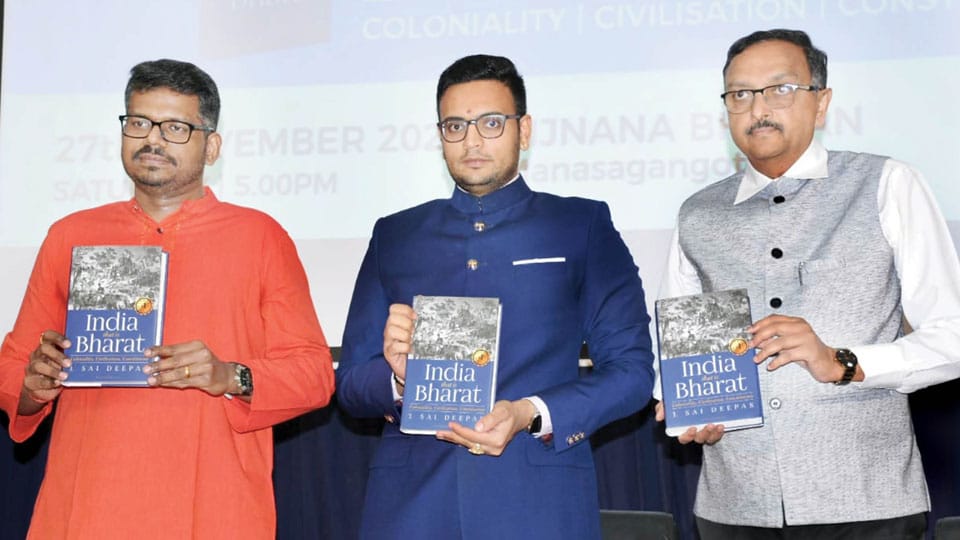 He was in the city last evening for the release of his book ‘India that is Bharat: Coloniality, Civilisation, Constitution’ at Vijnana Bhavan, Manasagangothri. Titular head of Mysore Royal Family Yaduveer Krishnadatta Chamaraja Wadiyar released the book and the event was organised by Manthana Mysuru.

Comprehensive trilogy: The first book of a comprehensive trilogy explores the influence of European colonial consciousness (or coloniality), in particular its religious and racial roots, on Bharat as the successor State to the Indic civilisation and the origins of the Indian Constitution.

The book traces the origins of ‘toleration’, ‘secularism’ and ‘humanism’ to Christian political theology and their subsequent role in subverting the indigenous Indic consciousness through a secularised and universalised reformation. The book attempts to liberate Bharat’s distinctive indigeneity.

Addressing the gathering, Sai Deepak said Karnataka in general and Mysuru in particular have attained a perfect balance between traditional, ancient and the modern. “First, we need to celebrate what belongs to us and our identity. Second is keeping an open mind for ideas and thoughts from outside and thirdly striking a balance between the past and present without the past being relegated to a state like in a museum,” he said.

“I appreciate the spirit of Mysuru that has struck the perfect balance with its values, architecture and thought process,” he said. Beginning his address by mentioning about Parashara Gurukulam on KRS Road near Belagola where he visited yesterday, Sai Deepak said that he was impressed with the vedic knowledge taught there.

Speaking about his book per se, the Supreme Court advocate said that colonisation is still plaguing India and we need to remove the cobwebs and focus on Indianisation or Bharathiyatha. “Now is the time to remove the colonial mindset as India is at crossroads or rather significant crossroads. University campuses have become a training ground for anti-India activities. Decolonisation of the mind is essential to detach the Indian Constitution in the areas of nature, religion, culture, history, education and language,” he noted.

“This is no age to be neutral. You have to take a stand when it comes to matters of  culture, society and nation. Fence sitters are the most dangerous for India as they will change their stand towards the direction of wind. Also, my book is not a mouthpiece of any political party. It is beyond politics and has a long-term vision of Bharat,” he said.

Emphasising the significance and relevance of the book in today’s India, Sai Deepak recalled a statement made by the Chief Justice of India last September that there is a need for Indianisation and decolonisation in the judicial administration. He also mentioned about another legal luminary saying that there is a need to ‘revisit several of our judgements’. And then, just a couple of days back our PM Modi himself spoke about the need for Indians to jettison the ‘colonial mindset’, he said.

“We must shed the baggage of colonialism and must re-access the past, not recreate, but re-inscribe the past values to the institutions of the present to chart an indigenous future. The idea is to create a hybrid future with a greater quotient of indigeneity as opposed to coloniality,” he explained. On the division of thoughts in terms of Left and Right, he said that the terms like these were handed down to us by the British and we still live in that mindset. “These are imported from the West and they are not Indic or  of Bharat,” he said.

“In 1918, the princely state of Mysore ruled by Nalwadi Krishnaraja Wadiyar IV scripted history by forming a committee headed by the Chief Justice of Mysore Kingdom Sir Leslie Miller to provide reservation for the depressed community members in government services. It is regarded as the first-ever effort by pre-independent India. This policy was adopted by the Constitution makers to ensure justice to marginalised communities,” he said.

To a question from the audience about freeing Hindu temples — with particular reference to Sri Chamundeshwari Temple in Mysuru that is under Muzrai Department — from State  control, Sai Deepak, who mentors the legal team of the Indic Collective Trust, said that he will fight this out in the Supreme Court.

“There is an ongoing legal movement in this regard and even the Chamundeshwari Temple is on the agenda, hence I do not want to discuss this in detail here,” he said.

In the past, he has argued that State control of temples has encouraged corruption and allowed non-Hindus to occupy administrative positions within temple managements, the State also allows predatory proselytisation.