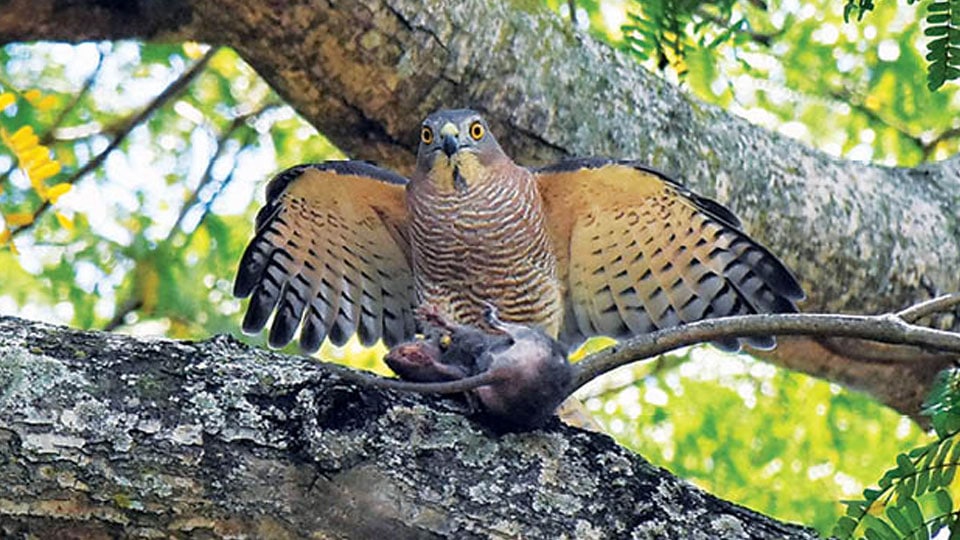 Shikra… The Leopard of Birds

Shikras — Accipiter badius, in Taxonomical terms, the urban raptor, a bird of prey, a small but fierce predator, is likened to the Leopards of the Cat family, owing to their fierce and brutal hunting techniques, blended with intelligence and strategy, exactly like the Leopards.

The urban treetops, specially the leafy canopied trees like Mango, Neem and Mahogany, attract and play host to the Shikras nest. Shikras are known for their specialised hunting skills. Each hunt is strategically planned, depending on the prey species. These Raptors also develop a preference and taste for particular prey. Some like songbirds, some like garden lizards (Othiketha or Hentegodha in Kannada). A few Shikras have also been observed and documented for having a high taste for bats, yes, bats, the flying mammals, specially the small ones, roosting in the daytime under rafters and canopies in urban areas.

The Shikra is a magnificent bird. The males are grey in the upper body and a dull whitish colour on the underside, with unique red coloured eyes. The females on the other hand are lightly coloured, and slightly bigger than the males, with yellow coloured eyes, like the one in the picture here.

The magnificent birds, with a high adaptability to preying habits, working a strategy for each hunt, calculatedly hunting and succeeding in more than 75 percent of attempts. The biggest threat the Shikra faces now is the poisoned and killed rodents thrown in open places. The poison in the carcass kills the bird.

The familiar, often heard from tree tops, Tickeeeee… Tickkkeee…. Tickee repeated, often heard in large trees in parks and gardens, is the Shikra, co-ordinating a hunt with its mate or parent.

READ ALSO  Pirates of the Lake

Though the International Union for Conservation of Nature (IUCN) regards it as safe, the vulnerability to their being poisoned by the baited rodents, is a major threat to the birds.