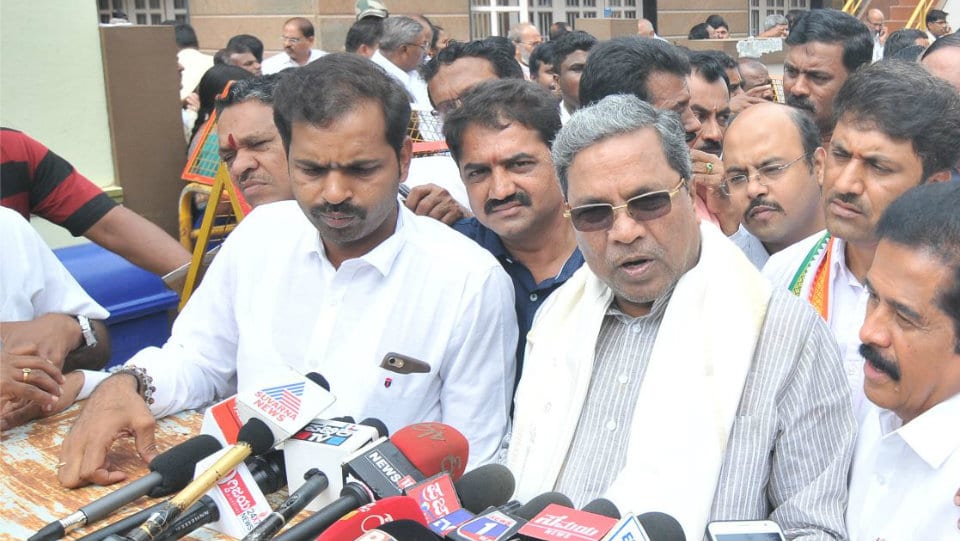 S.R. Mahesh says it is a political ploy

Speaking after unveiling the statue of Dr. B.R. Ambedkar at T. Narasipur yesterday, Siddharamaiah said there was no need to bifurcate Mysuru District.

Wondering whether it was possible to create a new district every 30 km, Siddu said that the idea of a new Hunsur District was unscientific and uncalled for.

Strongly opposing the demand for creation of D. Devaraj Urs district with Hunsur as its headquarters, the Opposition leader maintained that the demand was for political reasons and the Government should not respond to it.

Meanwhile K.R. Nagar JD(S) MLA and former Minister S.R. Mahesh speaking to press persons at Mysuru yesterday said that the demand for a separate Hunsur district is a political gimmick.

Asserting that he was against separate district status for Hunsur sub-division, which includes K.R. Nagar and Saligrama towns, Mahesh said that the people of K.R. Nagar taluk will not support the demand.

Maintaining that the Government should seek the opinion of the people and elected representatives from the sub-division before taking a decision, the MLA said that H. Vishwanath’s demand was nothing but a political ploy aimed at pushing the B.S. Yediyurappa Government into a spot of bother.

Questioning why Vishwanath did not put forth the demand when he was the Hunsur MLA, Mahesh said the disqualified MLA’s demand was purely political with the by-elections to Hunsur round the corner.