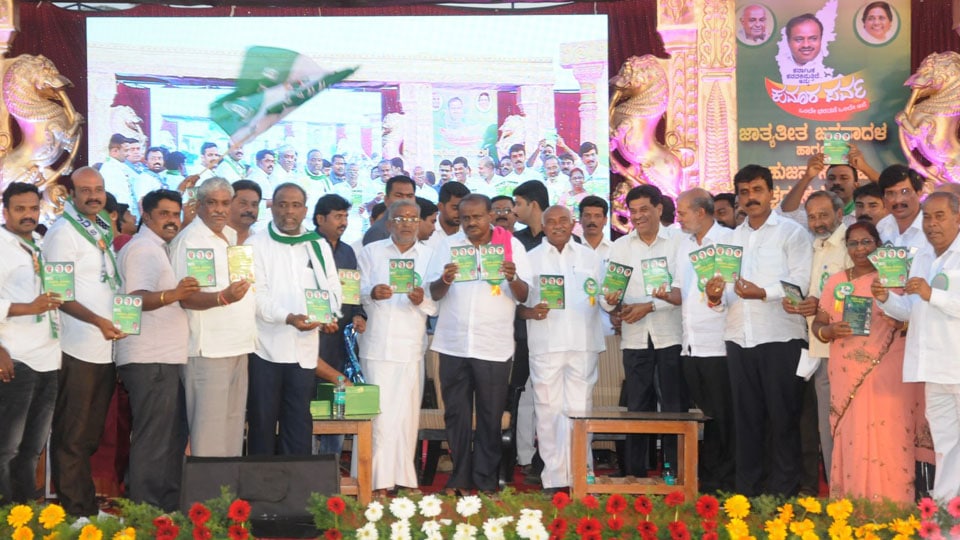 Siddharamaiah is a real opportunist: HDK

Mysuru: Accusing CM Siddharamaiah of being a real opportunist, former CM and State JD(S) President H.D. Kumaraswamy (HDK) has made a fervent appeal to the people to vote the JD(S) Government to power in the forthcoming Assembly polls.

Addressing JD(S) and BSP workers of K.R. Constituency as part of ‘Kumara Parva’ at Bhootal Pitch in Vidyaranyapuram yesterday, Kumaraswamy said that he had keenly watched Prime Minister Narendra Modi, AICC President Rahul Gandhi and BJP National President Amit Shah’s speeches in the State in the run-up to the Assembly polls.

Warning Siddharamaiah not to make irresponsible statements against the JD(S), he asked the CM to recall his past.

Terming Siddharamaiah as an opportunist, who ditched the party which had nursed him for decades, the former CM maintained that he had never indulged in caste or community polities, as alleged by the CM.

Taking a dig at Siddharamaiah for calling JD(S) as Deve Gowda clan party, Kumaraswamy said that CM was promoting his son and wondered whether this was not family politics.

Challenging the Congress to make a Dalit as CM, Kumaraswamy alleged that the CM was spending huge sum of money for winning from Chamundeshwari Constituency.

Calling upon the people to elect JD(S) candidate from K.R. Constituency K.V. Mallesh, Kumaraswamy said that he would announce farm loan waiver if the party was elected to power with a full majority.

Earlier, the JD(S) held a road show in K.R. Constituency, in which many top leaders of the party took part. Former CM H.D. Kumaraswamy launched the road show by garlanding the statue of Basaveshwara near Gun House Circle.

Hundreds of JD(S) and BSP workers took part in the road show that passed through Basaveshwara Circle, Agrahara Circle and Nanjumalige Circle before culminating at Vidyaranyapuram Bhootal Pitch where the rally was held.

During the road show, HDK appealed the people to elect party candidate K.V. Mallesh and thus pave the way for a new model of development that is different from the Congress and BJP.