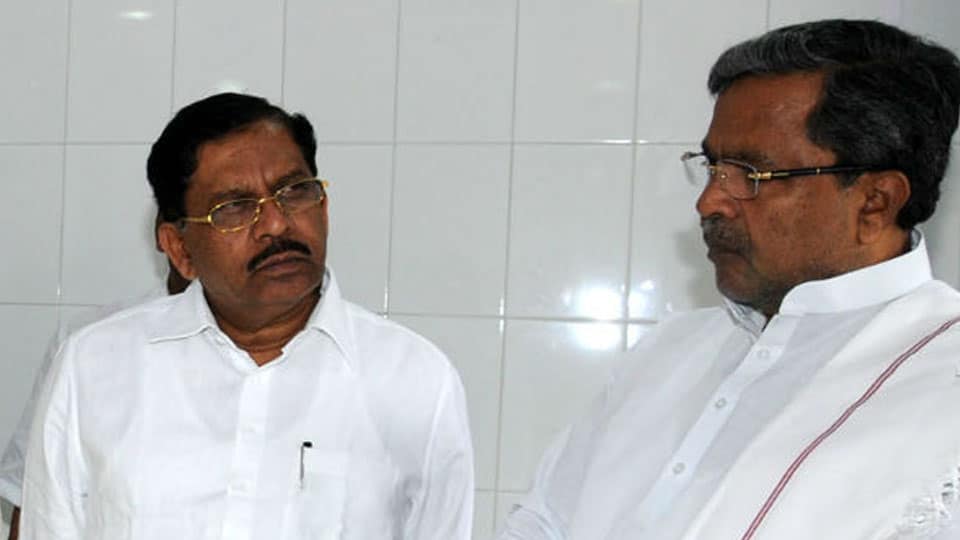 Bengaluru: Even as the spate of resignations by party MLAs rattled the Congress on Saturday, CLP leader Siddharamaiah and Deputy CM Dr. G. Parameshwara were reportedly engaged in a verbal duel about the mess in the party.

The two leaders who took part in a meeting called by Karnataka Congress in-Charge K.C. Venugopal here yesterday, are said to have blamed each other for the shock resignation of the MLAs.

While Siddharamaiah blamed Dr. Parameshwara for the revolt of Congress MLAs from Bengaluru, the Dy.CM denied the charge and said that MLAs loyal to the former CM had quit.

Explaining reasons for each of Bengaluru Congress MLAs revolt to Venugopal, Siddharamaiah squarely blamed Dr. Parameshwara saying that the Dy.CM was acting like a dictator when it came to issues concerning Bengaluru, BBMP and BDA.

Strongly denying Siddu’s remarks, the Dy.CM threatened to walkout of the meeting, when he was pacified by Venugopal not to do so, it is learnt.