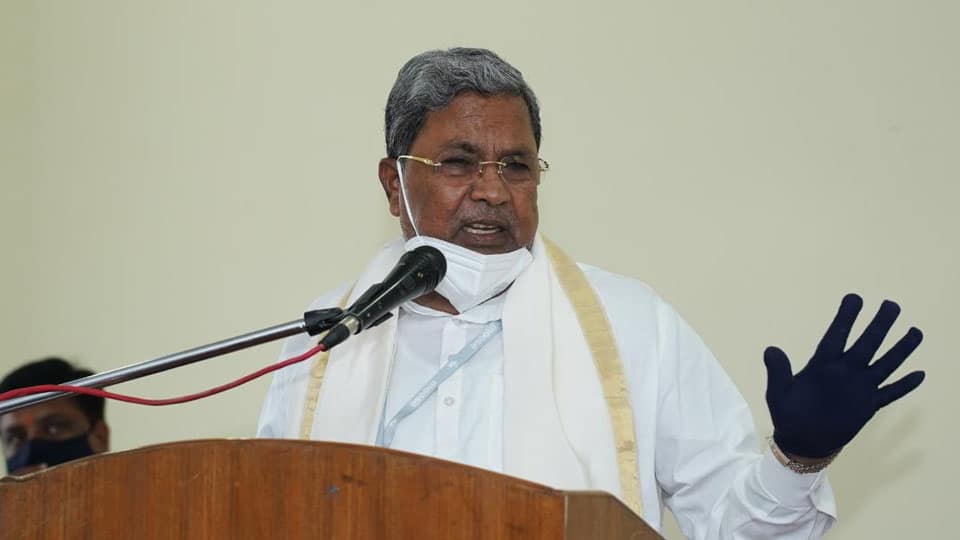 Mysore/Mysuru: Asserting that it was the Congress which fought for the country’s freedom, Opposition Leader and former Chief Minister Siddharamiah questioned the BJP’s contribution in the freedom struggle.

He was speaking after launching the Congress padayatra marking the 75th year of independence at Yelwal in the outskirts of the city on Sunday.

Pointing out that the Congress, which was established in 1885, had fought relentlessly for the country’s independence for 62 long years, he said that great personalities such as Bal Gangadhar Tilak, Gopal Krishna Gokhale, Mahatma Gandhi, Jawaharlal Nehru, Sardar Vallabhbhai Patel, Subhash Chandra Bose and  Abul Kalam Azad were all products of the Congress who sacrificed their lives for the cause of independence. But the Jansangh was established only in 1951 and in 1980 it transformed as the present BJP, he said and wondered what was the contribution of the BJP for the country’s independence.

Noting that it was the Congress which first propagated the spirit of patriotism among the masses, he lashed out at the BJP for ‘teaching’ the Congress on patriotism.

Launching a tirade against the JD(S), Siddharamaiah said that the JD(S) was never involved in any struggles.

Pointing out that the Congress supported the JD(S) in 2018 in order to keep out the corrupt BJP from power, he averred that the Coalition Government fell because of H.D. Kumaraswamy’s (HDK) follies and the Congress was not responsible for the collapse.

Terming the BJP Government in the State as a ‘40 percent Commission’ Government, he asked the people to throw out the corrupt BJP from power in the Assembly polls and to bring the Congress to power with an absolute majority. He also called upon the party workers to set aside their differences and work for ensuring the victory of the party candidate, no matter who the candidate is.