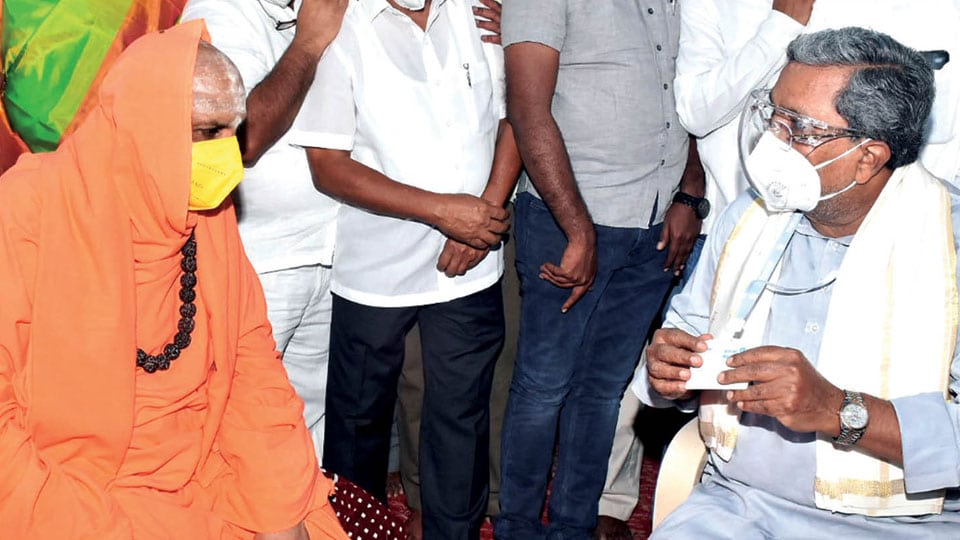 Mysore/Mysuru: Former Chief Minister Siddharamaiah has a three-layer protection from COVID-19 now. On a flying visit to Mysuru, this morning he was seen wearing a face mask, a face shield and an innovative ‘Viral Barrier’ sachet around his neck.

The strap around his neck and the hanging sachet became the talking point at Suttur Mutt where he had been to launch two Ayurveda products brought out by JSS  Ayurveda Hospital.

While Siddharamaiah sat down to speak to Suttur Seer Sri Shivarathri Deshikendra Swamiji, the Seer asked Siddharamaiah what he was wearing around his neck and asked “Have you worn it as a Doctors’ Day special?”

The former CM, in his inimitable humorous style, told the Swamiji that the barrier gives protection from airborne microbes along with viruses, bacteria and pollen by eliminating their activities in one-metre surrounding air.

Showing off the neck tag hanging around his neck, Siddharamaiah told the Swamiji that it was an easy-to-wear tag with a sachet at end that can be worn like an ID card. “It keeps me safe wherever I go, whether it is my workplace or public places. I have created fool-proof protection around me to prevent COVID virus, cold, flu and all respiratory infections,”   Siddharamaiah explained.

The ever-inquisitive Swamiji questioned the former CM as to who gave this idea to him and to which, Siddharamaiah replied with a smile, “My friend Dr. M.R. Seetharam of M.S. Ramaiah Memorial Hospital in Bengaluru gave me these sachets (each sachet costs Rs. 2,400 in India) and one sachet can be worn for four months. I have made it a practice to wear it every day. I cannot take the risk.”