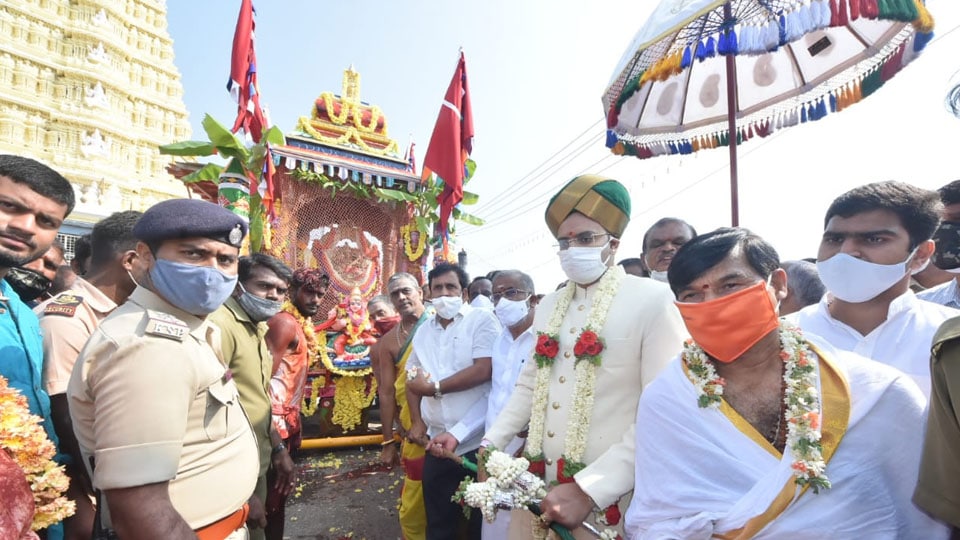 Mysore/Mysuru: Amid restriction on entry of devotees, the annual ‘Chamundeshwari Rathotsava’ was held in a simple, yet traditional manner atop Chamundi Hill this morning.

The Rathotsava, also called Samvatsarothsava, is held atop the Hill every year after Vijayadashami, during Ashwija Maasa in Uttarabhadra Nakshatra in a grand manner, with thousands of devotees thronging the Hill Temple for the event. But due to the outbreak of the deadly COVID-19 contagion, the District Administration, as a crowd control measure, had restricted entry of devotees for the event.

Due to simple celebration of the event, the small Ratha (chariot) was used today, instead of the big one used in the past years.

The Rathotsava formally began with titular head of Mysuru Royal Family Yaduveer Krishnadatta Chamaraja Wadiyar launching the Ratha in the auspicious Dhanur Lagna between 9.40 am and 10.05 am, amid all customary and traditional rituals.

A 30-member team of Cannon Unit , led by CAR ACP Sudarshan, fired 21 rounds in the air marking the Rathotsava. Later, the idol of the presiding deity placed on the decorated small chariot was taken around the temple along with Mangala Vaadya, before being brought back inside the temple.

Earlier in the day, a team of Priests, led by the temple Chief Priest Dr. N. Shashisekhar Dixit, performed customary rituals such as Mahanyasapurvaka Rudrabhisheka and Panchamrutha Abhisheka, following which the presiding deity was decorated with ‘Simhavahini Alankara.’ Later, mahamangalarti took place and subsequently, the Mantapotsava ritual was performed and the idol of the presiding deity was placed in the decorated small chariot.

Speaking to press persons after he launched the Rathotsava, Yaduveer said that the Rathotsava was conducted today in keeping with the long-standing tradition associated with Dasara festivities.

Maintaining that the religious traditions and customs of the Mysore Palace and atop the Hill are almost one and the same, he said this year, the celebration was a simple one on account of the COVID-19 pandemic.

Stating that he has prayed the deity to end the menace of the pandemic throughout the globe and bring peace and prosperity for the people of the country, Yaduveer said that he hopes that the celebration next year would be usual as in the past.

MLAs S.A. Ramdas and G.T. Devegowda and other local people representatives were present during the occasion.

The Police had provided tight security atop the Hill, with the District Administration imposing restriction on entry of devotees.

Temple Chief Priest Dr. N. Shashishekar Dixit told Star of Mysore that in the wake of COVID-19 norms, there will be no ‘Theppotsava’ atop the Hill this evening.

‘Theppotsava’ is an event associated with Rathotsava and used to take place every year in the past but dropped this year, he said and added that, however, Hamsavahanotsava and Simhavahanotsava will take place, in keeping with the custom.

2 COMMENTS ON THIS POST To “Simple Rathotsava atop Chamundi Hill”