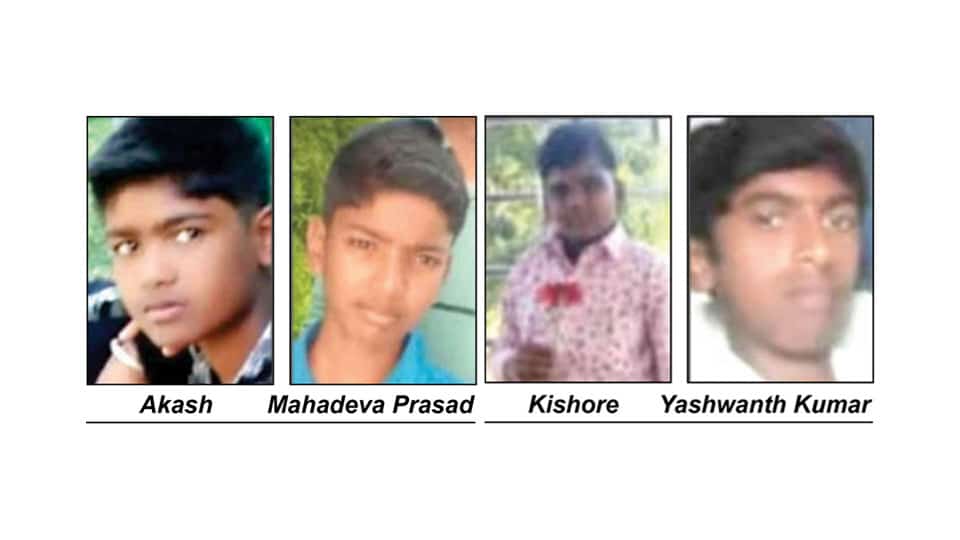 Six drown in separate incidents at Talakad and KRS

Mysore/Mysuru: In separate incidents, four boys and two youths were drowned at Talakad and at Krishnaraja Sagar (KRS) near here.

In the first incident, four youths, who had gone for a swim in Cauvery River near Hemmige B village near Talakad yesterday, met their watery graves.

While Kishore was studying in 8th class at Morarji Desai Residential School at Sosale, the others were pursuing their 10th standard at Talakad Government School. As it was a holiday for the school, the four boys, at about 1.30 pm yesterday, went to the bathing ghat near Somanatha Swamy Temple where they parked their bicycles, kept their clothes on the steps of the bathing ghat and ventured into Cauvery River.

A passerby, who noticed the boys playing in the water, did not see them after some time. As the bicycles and clothes were still found at the spot, the passerby, on suspicion, informed the Police. Talakad Sub-Inspector Siddaiah, ASI Ramesh and staff, rushed to the spot and summoned Fire and Emergency Services personnel, who, with the help of local fishermen and expert divers, launched a search and managed to fish out the bodies of Yashwanth and Mahadeva Prasad in the evening. As it had got dark, the search operation was suspended last evening. The search operation resumed this morning and all efforts are being made to fish out the bodies of Kishore and Akash.

In the second case, two youths, who had come Kalamma Temple on the North Bank of KRS were drowned, when they went for a swim in Visvesvaraya Canal yesterday.

The deceased are Basavegowda (26) and Javaregowda (34), residents of Mallinathapura village in Hunsur taluk. The two were drowned after they were swept away by strong water force.

KRS Police, with the help of expert swimmers, conducted a four hour-long operation and succeeded in fishing out the bodies. A case has been registered at KRS Police Station.