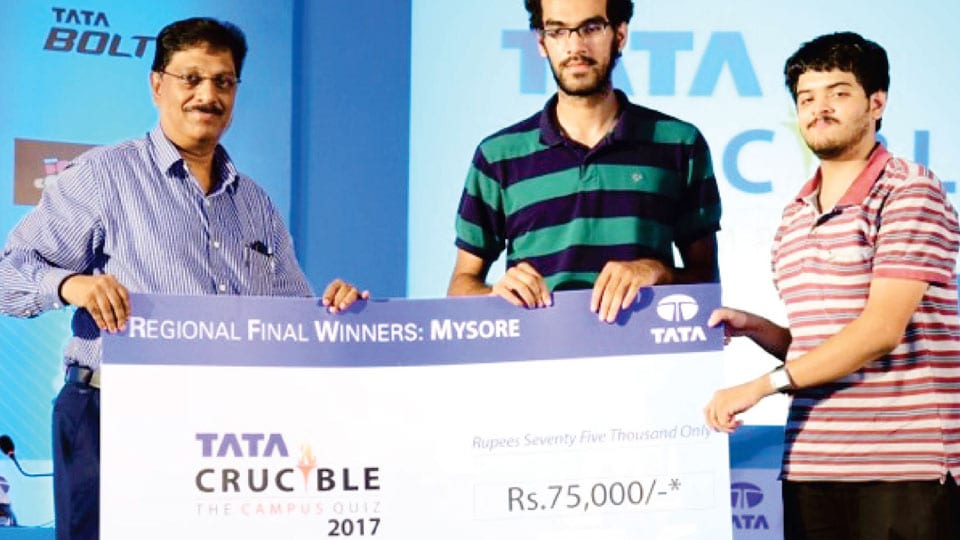 Mysuru – R.Srikar and K. Shreyas from Sri Jayachamarajendra College of Engineering (SJCE), Mysuru, have emerged victorious in the  regional round of Tata Crucible Campus Quiz-2017 held in city recently.

The SJCE team, after defeating 378 teams, will now compete with seven other teams in the Zonal Finals to be held in Coimbatore.

The runners-up position was bagged by S. Bhargav Ayyangar and Rashmi Ravi from National Institute of Engineering (NIE), Mysuru. The winners of the Mysuru regional round were awarded a prize money of Rs. 75,000 while the runners-up were awarded Rs. 35,000. The winners of national finals will receive a grand prize of Rs. 5,00,000  along with the coveted Tata Crucible Trophy.

Each segment of the quiz was divided into three rounds titled ‘League of Legends’, ‘Need for Strategy’, and ‘Game of Crowns’. The quiz was hosted by ace Quiz Master Giri Balasubramaniam.

Dr. B. Krishnamurthy, Director and Dean, Mysore Medical College & Research Institute, who was the chief guest distributed the prizes to the winners and runners.