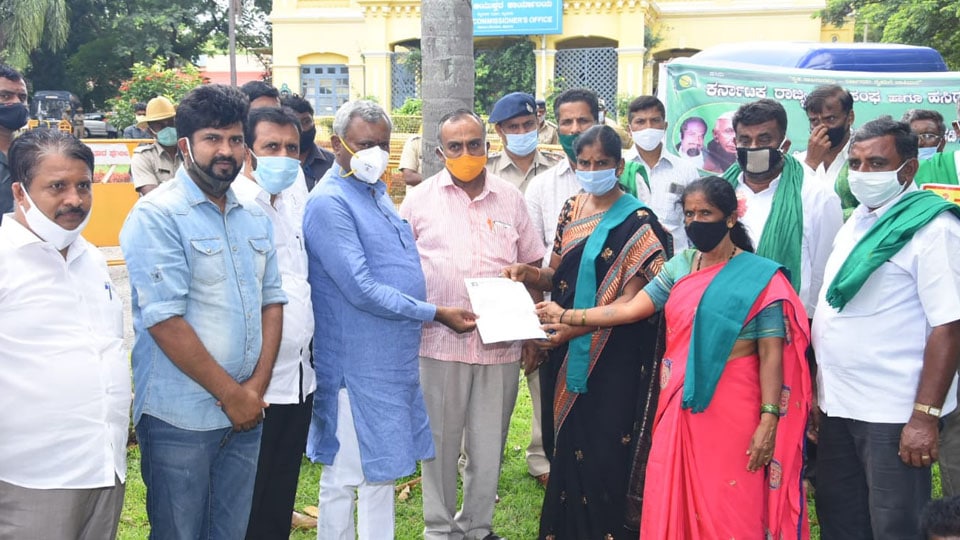 Slew of protests staged in city

About 25 farmers including women, under the banner of Karnataka Rajya Raitha Sangha and Hasiru Sene, led by their District President Badagalapura Nagendra, opposing the amendments to the Land Reforms Act-1961, staged a protest near the Regional Commissioner’s Office.

Pointing out that there were more number of small farmers in the State and the State Government by amending the Act would drive these farmers to the streets, the protestors alleged that the Government was encouraging the rich and corporates.

They said that there would be no land for agriculture if the Act is implemented and added that the country would face severe food scarcity if the Land reforms Act is amended.

The protestors also opposed the amendments to the APMC Act and alleged that the Government was handing over the agricultural produce to corporates.

The protestors later handed over the memorandum to District Minister S.T. Somashekar, who arrived at the Regional Commissioner’s Office for a meeting.

Farmer leaders Hosakote Basavaraju, P. Marankaiah and others were present.

SUCI: About 20 activists of Socialist Unity Centre of India (SUCI) staged a protest near the DC Office against increasing fuel prices.

Stating that the people, who are already in panic due to COVID-19 pandemic, are being made to suffer more following the increase in fuel prices, they urged the Government to cut down the taxes and make fuels affordable to all.

Pointing out that the District Administration had successfully controlled COVID-19 in the district which began to increase only after the Government permitted inter-State and inter-district travelling, the protestors urged the Government to control travel.

They also urged to roll back the lockdowns during nights and Sundays by terming it unscientific which is posing severe problems to everyone.