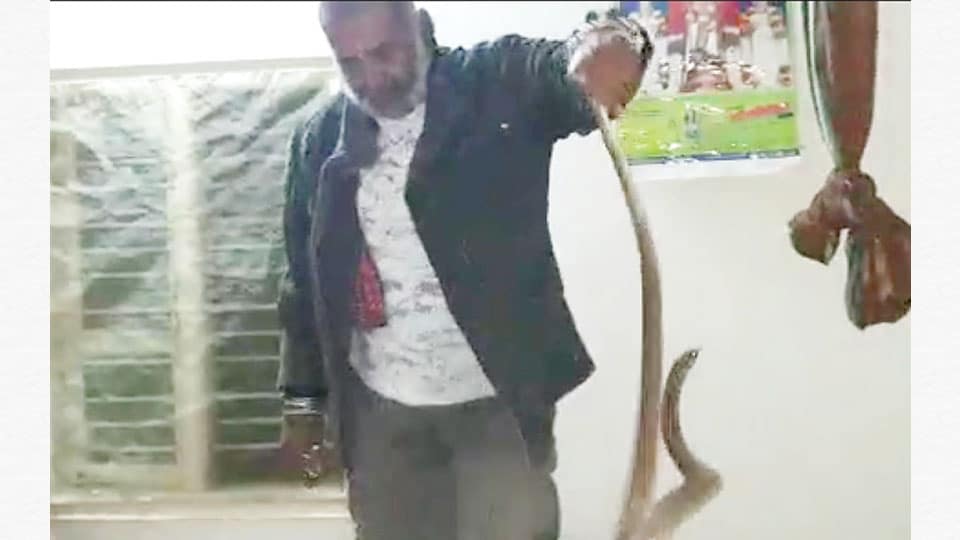 Mysore/Mysuru: A Cobra that had entered the bedroom of a house where a mother and her pregnant daughter were sleeping and took refuge under a suitcase has been rescued by city’s well-known snake rescuer and wildlife conservationist Snake Shyam at Siddalingapura near here on Wednesday midnight.

The Cobra was rescued from the house of one Madesh. At about 12.45 am, a Cobra about 5 ft. long that had entered the bedroom of the house began to hiss and the mother-daughter duo, who heard the hissing sound switched on the lights only to see the big snake at a distance.

The shocked family members ran out of the house screaming which attracted a large crowd in front of Madesh’s house. Meanwhile, someone in the crowd called Snake Shyam over the phone and informed him about the snake’s presence.

Snake Shyam, who arrived at the spot in 30 minutes, rescued the Cobra which had taken refuge under a suitcase under the cot and later released it into the wild.

On Thursday night too, Snake Shyam has rescued a snake each at Vijayanagar 4th Stage and Hinkal.