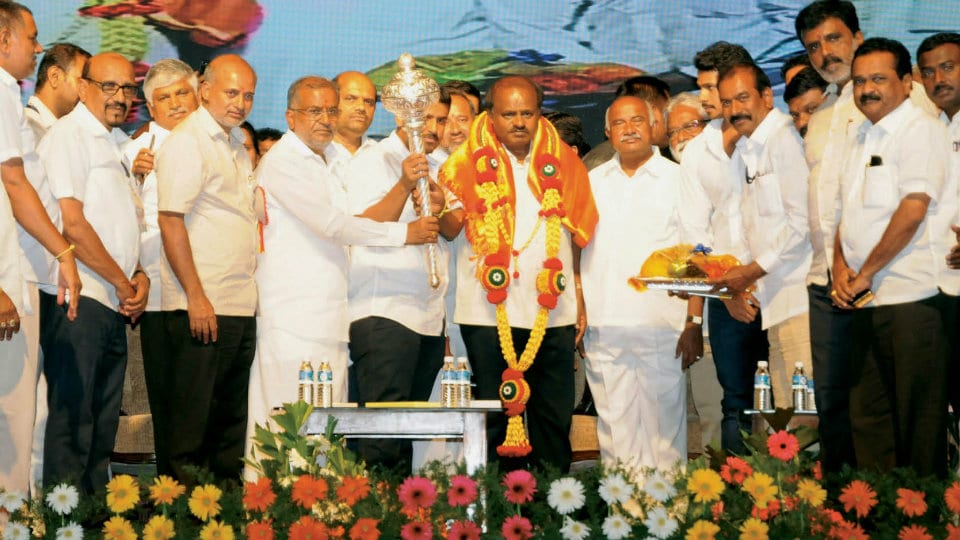 Speaking after being felicitated  by his supporters and residents of the city at the programme held at Maharaja’s College Grounds in city on Friday, he said that he would keep his promise he had  made to the residents.

He said that houses of more than 300 families who are living since decades in the land spread over 22.12 acres at Kesare belonging to K.R. Mills Colony would be protected. Title Deeds and other land ownership rights will be given to the residents. The Government has released Rs.10 crore to clear the mortgage loan. Likewise, houses constructed in Vijayashreepura would also be protected, he said.

HDK said that the Government has also initiated measures for the revival of defunct Falcon Tyres Limited by entering into an agreement. Livelihood of all 2,500 employees of this factory would be protected and steps have been taken for the reopening of this once reputed tyre manufacturing factory in city, he said.

Promising to look into the problems of the people affected during the breaching of Taraka Dam Gate in H.D. Kote taluk, he recalled that he had distributed compensation for the affected families in 2006 and permanent solution could be found for this also, he said.

‘One step ahead of Siddu’

Stating he has taken up a slew of developments works and was one step ahead of his predecessor Siddharamaiah for development of Mysuru and other adjoining districts; he said that he has given approval for the implementation of development works worth Rs. 3,000 crore in Mysuru  district, which included Rs. 150 crore to ensure basic facilities to residents of the city, Rs. 570 crore worth Hale Unduwadi Drinking Water Project to ensure drinking water to the villages around Mysuru. Over Rs. 8,000 crore development works have been initiated for improvement of neighbouring Mandya district.

Listing out the achievements of his government including Rs. 45,000 crore farm loan waiver scheme, HDK said that he has been making all efforts to ensure good governance by presenting the budget outlay of Rs 2.37 lakh crore balancing the salary expenditure of the government employees besides initiating development works simultaneously.

He said that his government implemented a slew of measures for empowerment of ailing farmers across the State including incentives of Rs. 2,500 crore to milk producers and providing Rs.  11,000 crore to ensure free power supply for irrigation pumpsets.

Karnataka Government will get Rs. 2,098 crore under the Prime Minister Kisan Scheme in which cash incentives will be given for small and marginal farmers in three instalments by Centre.  He also promised to waive off the loans borrowed by Stree Shakti Sanghas.

State Government has also implemented Raitha Gruhalakshmi Scheme for SHGs to release gold ornaments pledged at banks. Government is paying the interest for the pledged gold ornaments. Instructions have been given to all banks not to harass SHGs to recover loan amount. 4.5 lakh street vendors were benefited from Badavara Bandu scheme, he added.

READ ALSO  Twist in the Plot: Mysuru loses out on Film City

Several JD(S) leaders who were present at this function urged the CM to field his son Nikhil from Mysuru-Kodagu in upcoming Lok Sabha polls triggering speculations that he would be the coalition government’s candidate.