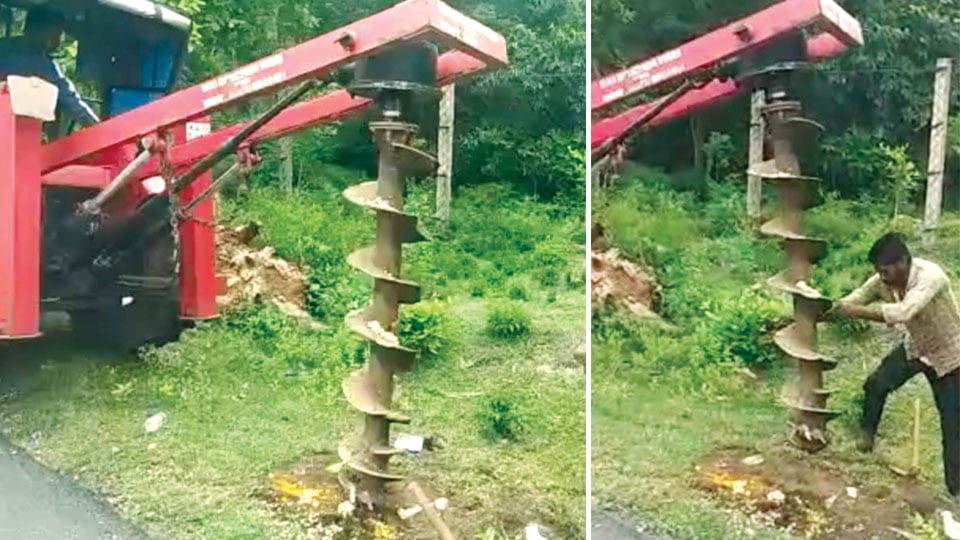 150 electricity poles to come up from Thavarekatte to Chamundi village

Mysore/Mysuru: The move to drill deep holes to install street-lights by the side of the road that leads to Chamundi Hill ahead of Prime Minister Narendra Modi’s scheduled visit has irked environment activists.

The District Administration has taken up the works to erect street- lights from the foot of Chamundi Hill right to the top and heavy drilling machines are doing the work as the installation has to be completed before June 20.

In all, 150 poles will be erected from the Chamundi foothill to the Chamundi Gram Panchayat limits and all the poles will sport LED lights. Installation of lights is for the public good so that villagers and the public can travel on the road after dark, officials said.

The drilling works have been taken up right next to the fencing of Chamundi Hill Reserve Forest. “Officers have now resorted to digging deep inside a Reserve Forest that too at a time when landslides have occurred atop the Hill and they have still not been restored,” S. Shylajesha, an environmental activist, told Star of Mysore.

“Chamundi Hill is a Reserve Forest and comes under the administration of the Forest Department. When we questioned the officers who are doing the work, they claim that they have written permission from the Forest Department. In fact, there must not be any digging or land-altering activity inside a Reserve Forest and there are many High Court and Supreme Court judgements in this regard,” he said.

The eco-sensitive Chamundi Hill already has loose soil due to which a couple of landslides have occurred. “Have they taken any inputs from the earth scientists before drilling holes? Once the poles are dug, poles will be installed and bright lights will be fixed. This is in clear violation of the Forest Act and a classic case of fence eating the crop,” Shylajesha regretted.

Deputy Conservator of Forests (DCF) (territorial) Kamala Karikalan said that the space for the poles is being dug up outside the Reserve Forest boundary. “The road belongs to the Public Works Department (PWD) and the officials might have taken up the works for the public good. If they are digging inside the Reserve Forest, then permission has to be taken from the Forest Department. The issue has not come to my notice till now and the departmental jurisdiction has to be examined,” she clarified.

Meanwhile, LED lights are being installed on Chamundi Hill Road from Thavarekatte to Chamundi village. Every 20-metre space is being drilled to erect electricity poles and the works have been taken up jointly by the Zilla Panchayat and Chamundeshwari Electricity Supply Corporation (CESC).

“At many places, we are encountering rocks and BSNL cables while digging. We will seek information on the cable route from BSNL officers and proceed to drill so that the process does not damage the cables,” PWD Assistant Executive Engineer Chikkanna said.

ONE COMMENT ON THIS POST To “Special focus for Prime Minister Modi’s visit: Drilling work for street-lights on Chamundi Hill irks green activists”