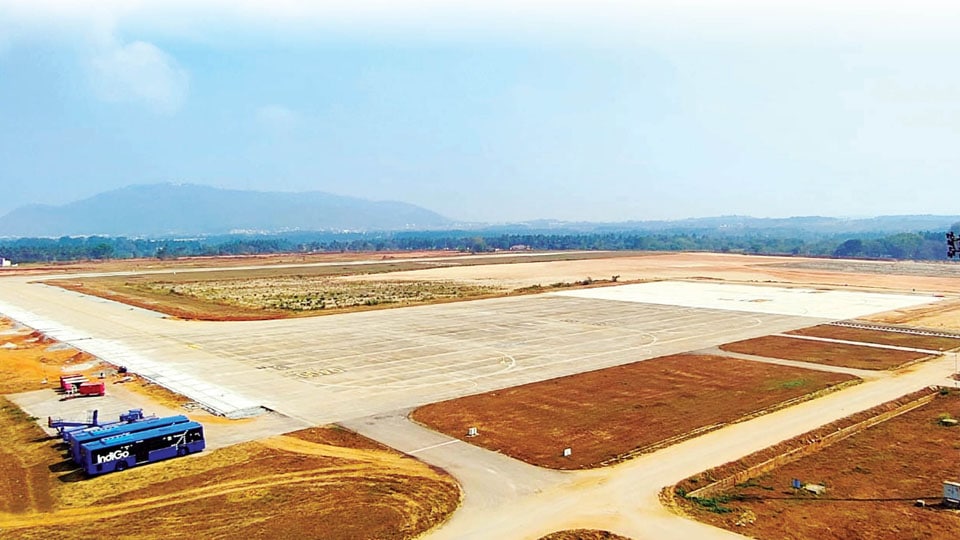 Mysore Airport to be developed into International in two years

Minister Somanna says works have begun at an estimated cost of Rs. 1,820 crore

Mysore/Mysuru: The Mysore Airport at Mandakalli will be developed into an International Airport in the next two years. Both the Centre and State Governments will fulfil the task, said Housing and Infrastructure Minister V. Somanna.

Speaking to reporters in Bengaluru yesterday, the Minister said that there are grand plans to develop various airports in Karnataka and the Mysore Airport will get a particular focus. The upgraded Airports will boost those places as Industrial and Agricultural Hubs. In addition, new airports will be developed in Raichur, Davanagere and Koppal, he added.

The works on upgrading the Mysore Airport has begun with an estimated cost of Rs. 1,820 crore and the State Government has released Rs. 319.13 crore for land acquisition to increase the Airport runway length, he added.

At present, only ATR-72 type planes can land at Mysore Airport which has a length of 1,740 metres and a breadth of 30 metres. To facilitate the landing of bigger planes, the runway must be expanded to 2,750 metres and its breadth has to extend up to 45 metres. Over 240 acres of additional land is required for the expansion, the Minister noted.

The Mysore Airport is spread over 490 acres and the land will be acquired by the State Government and it will be handed over to the Airports Authority of India (AAI) for expansion. The expanded runway where planes like Boeing 737 and Airbus A320 can land, a full-fledged 10-lane Economic Corridor between Mysuru and Bengaluru and Container Corporation of India’s (CONCOR) Multi-Modal Logistics Park at Kadakola are expected to be a game-changer for the region, he added.

“Mysuru-Kodagu MP Pratap Simha is showing keen interest to develop the Mysuru Airport into international standards and it is with his help and coordination, that the Centre will release Rs. 1,500 crore for the runway expansion and other allied works. If Mysuru has an International Airport, the focus will naturally shift from Bengaluru to Mysuru as many industrialists will be looking to establish a base in Mysuru,” Somanna said.

Like Mysuru, there are plans to upgrade the existing airports to bigger ones so that bigger planes can land at places like Vijayapura and this will herald an era of development in Karnataka. “At present, the focus of Industrialists in establishing industries is on Bengaluru. We want to change this and the focus will be on other cities like Mysuru, Vijayapura, Shivamogga and Bagalkot,” the Minister said.