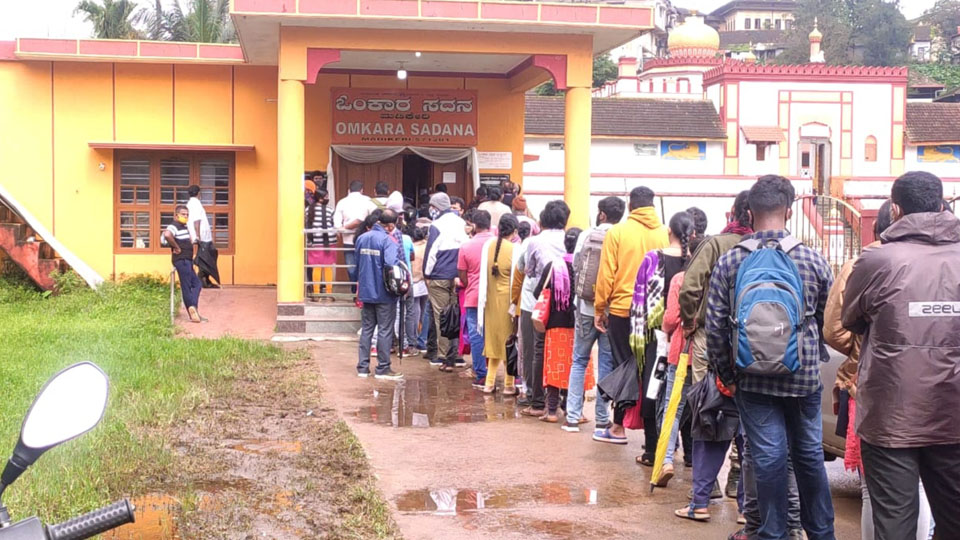 Mysuru/Madikeri: A report from the State COVID War Room has stated that 10 out the 30 districts in Karnataka including Mysuru and Kodagu have reported COVID-19 Test Positivity Rate (TPR) that is higher than the State average of 1.4 percent from July 25 to July 31.

While Mysuru reported a TPR of 2 percent, Kodagu reported 4.7%. Dakshina Kannada tops the list with a TPR of 5%. Notably, more cases are being seen mainly in the border districts that have geographies next to Kerala.

Though experts have suggested to the Government that restrictions have to be imposed including night and weekend curfews and preventing crowding at any cost, the State is adopting a wait and watch approach.

Quarantine back in Bengaluru

Meanwhile, BBMP Chief Commissioner Gaurav Gupta stated this morning that all those who come to Bengaluru from high-risk States like Kerala and Maharashtra have to undergo a 14-day quarantine at places suggested by the BBMP.

At the quarantine centres, RT-PCR tests will be conducted and only those reporting negative status and asymptomatic ones would be sent home. The BBMP has also decided to immediately implement the concept of containment zones.

In view of the State Government giving authority to the DCs of border districts to take local decisions to prevent the virus spread, Kodagu DC Charulata Somal issued fresh guidelines.

As per the orders issued this morning, all those who come to Kodagu from Kerala and Maharashtra including tourists and other official visitors have to produce a negative RT-PCR certificate not less than 72 hours before entering the District.

All the check-posts have been placed under high alert and RT-PCR testing kiosks have been established. The second level of screening will be undertaken at resorts, home stays, hotels, dormitories and lodges where the respective accommodation managements have been given the responsibility of ensuring the less than 72-hour RT-PCR reports from all tourists from the high risk States.

Also, tourist accommodation owners have been asked to report the tourist arrival to the respective Town Panchayat and Gram Panchayat offices to keep a track of the visitors. Action would be taken against violators under the Disaster Management Act and under the provisions of the Indian Penal Code, the DC’s order stated.

Meanwhile, Kodagu faces severe shortage of vaccines as only 2,500 vaccines are sent to the District once in two or three days. Kodagu Hotel and Resort Owners Association President Nagendra Prasad told Star of Mysore that though the hotel staff have been considered as frontline workers, nearly 70 percent of them are not fully vaccinated.

“This is a risk and we have more than 1,000 workers in 250 hotels, over 2,500 to 3,000 workers in home stays and resorts. All the tourists come in direct contact with the non-vaccinated staff,” he said and added that the MLAs of the District must pressurise the Government to send more vaccines to Kodagu on a daily basis.

Each vaccine centre in the district receives only 100 doses and people stand in queues as early as 5 am to get tokens that are distributed at 10 am. Madikeri MLA M.P. Appachu Ranjan told SOM that from tomorrow (Aug. 3), Kodagu will get a supply of 5,000 vaccines instead of the present 2,500 shots.

“We are a border district and I have already spoken to the Health Department in view of the high Test Positivity Rate and the latter has assured to send 5,000 vaccines in batches,” he said.