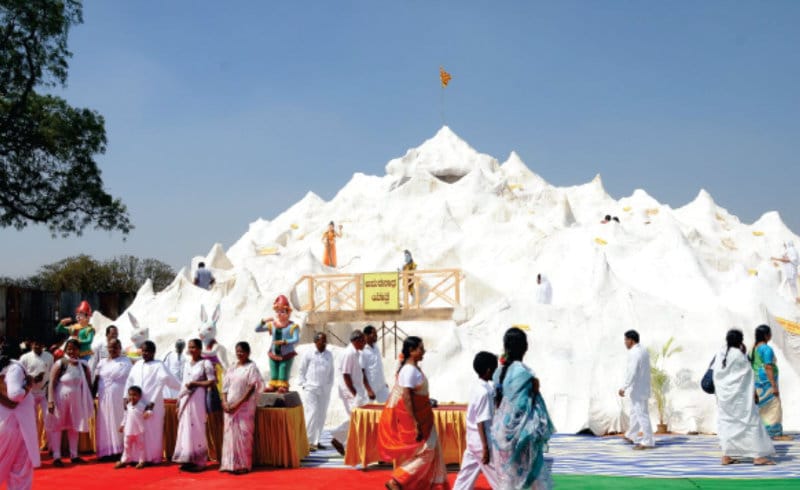 The Gyan-Vigyan Divya Darshan Mela, organised by Prajapita Brahma Kumari Ishwariya Vishwa Vidyalaya, Mysuru, as a part of its Golden Jubilee celebrations at the Maharaja College Grounds, has been attracting a lot of devotees from Mysuru and surrounding districts.

Brahmakumaris organisation, involved in spreading the essence of spiritualism, has set up 24 stalls at the mela to create awareness about various topics such as the ill-effects of smoking and alcohol, introducing people to healthy and hygienic food and others. One of the stalls also introduces the visitors to the organisation, its founders and objectives.

Stalls are also dedicated to Lord Krishna where models depicting the ‘Rasaleela’ and his childhood. A laser show about Brahmakumaris has been one of the main attractions. Volunteers are also seen dressed as ‘Asta Devataas’ (Eight Goddesses) much to the delight of visitors.

The 40-ft Amarnath cave has also been a centre of attraction. Devotees visiting the place can get a feel of the holy shrine which is located in the Himalayan ranges. There is also a 24-ft-tall statue of Kumbakarna which depicts the present day human being who has become lazy.

Brahmakumaris organisation has also invited scholars and orators to speak on various topics including spiritualism and related fields. There are also seminars on topics such as ‘Women as saviours of culture’ and ‘Shaswath Yogic Agriculture’. The mela ends on Feb. 26 and is open for public from 9 am to 9 pm. Entry is free.