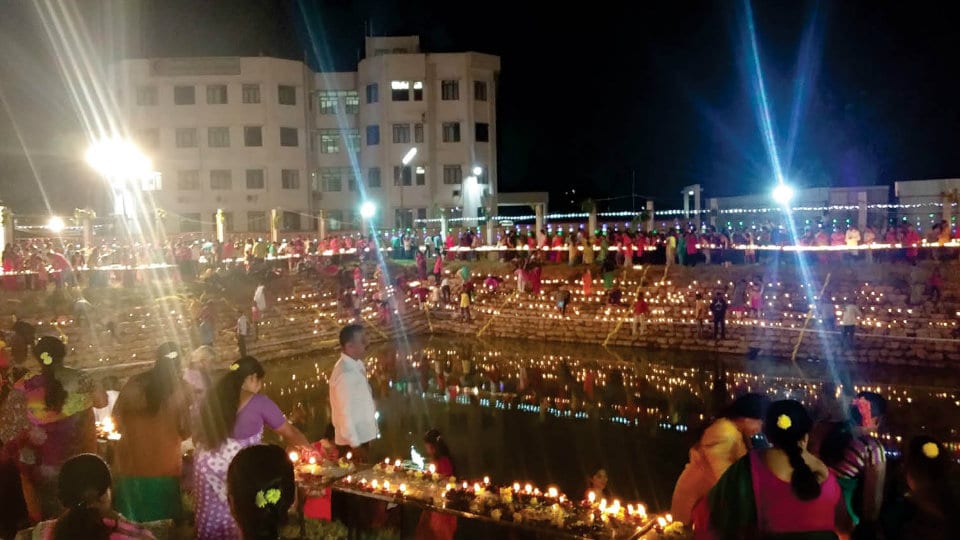 Hinkal Village Development Committee Hon. President Lohith V. Urs inaugurated the festival of lights by lighting lamps. Thousands of devotees, including women, children and youths joined together in lighting lamps arranged on the steps of Kalyani.  A large number of devotees, who arrived from Hinkal, Hootagalli, Koorgalli, Vijayanagar, Manchegowdanakoppal, Bogadi and surrounding areas, brought lamps from their own pockets, to take part in the Deepotsava. The flowers, given the shapes of Swastik, Om, Shivalinga and other symbols, decorated the steps which was a major attraction.

Police were deployed for security as huge number of devotees flocked the Kalyani. The volunteers of Hinkal Village Development Committee were also deputed near the steps of Kalyani as a precautionary measure.

He said that Lohith approached him three years back for cleaning and removing the silt from Kalyani at Sri Nanneshswara Temple.  “I had promised to get it cleaned and accordingly, joined hands with the Committee for the cleaning works.”

Expressing his happiness to see the cleaned Kalayani now, he said that it was a result of the efforts put in by the villagers. A compound was constructed around the Kalyani with the funds provided by Mysuru Urban Development Authority (MUDA) recently.

“Earlier, some people objected for construction of compound around Kalyani fearing mishap. However, he cleared their doubts and facilitated the works of construction of compound around Kalyani.  He also appreciated the help of District Minister G.T. Devegowda and villagers in preventing the encroachment around Sri Nanneshwara Temple,” the MP said.

Pratap Simha said that several leaders of Hinkal met him recently appealing him to name the Hinkal flyover after Hakka-Bukkaraya, the founders of Vijayanagara Empire.

He said that he had already given instructions to National Highways Authority of India (NHAI) officials to take a suitable decision besides naming Hinkal signal after former Prime Minister A.B. Vajpayee.