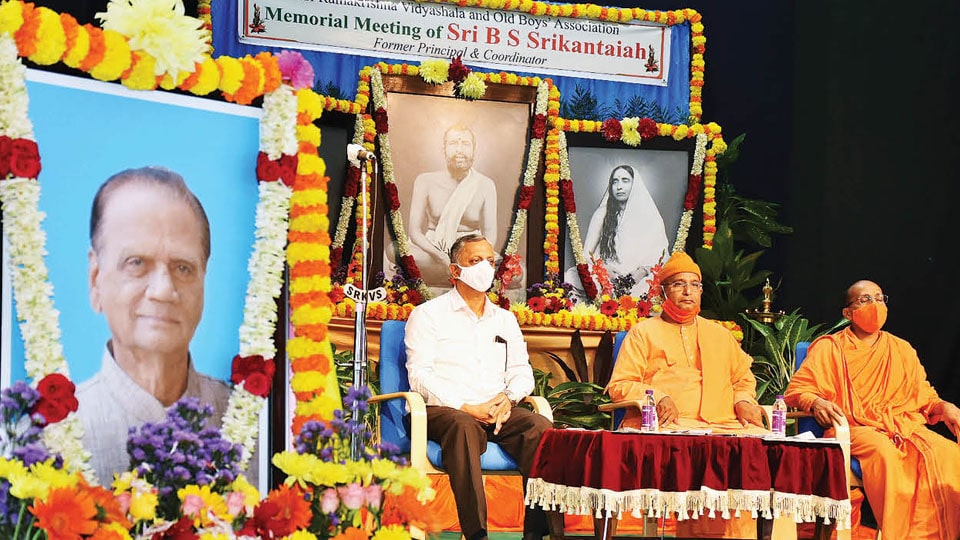 Mysore/Mysuru: B.S. Srikantaiah, who  had served as a teacher, Head Master and Principal of Sri Ramakrishna Vidyashala in Yadavagiri for decades and who passed away recently, was paid rich tributes at a condolence meeting organised by the Vidyashala Alumni Association in the Vidyashala premises yesterday.

Mysuru Sri Ramakrishna Ashram President Swami Muktidanandaji, who presided, said that B.S. Srikantaiah, who was popularly called as BSS, used to do any work entrusted to him, with dedication and determination. Noting that BSS used to observe everything around him closely, he said that he was a ‘Karmayogi’, who dedicated his entire life for teaching Vidyashala students.

Pointing out that although BSS was not amongst us now, Muktidanandaji said that the efforts that he made for bringing discipline among the students and for the growth of the Vidyashala, remains etched in the minds of all those associated with the Vidyashala. He prayed for the departed soul to rest in peace.

Sri Ramakrishna Ashram Correspondent Swami Yukteshanandaji, in his address, said that BSS brought dignity to every work that he did. He further said that BSS used to do every job entrusted to him seriously and with utmost commitment.

Earlier, floral tributes were offered to the portrait of BSS.

A video on the life of BSS, his achievements and his services to the Vidyashala was screened on the occasion.