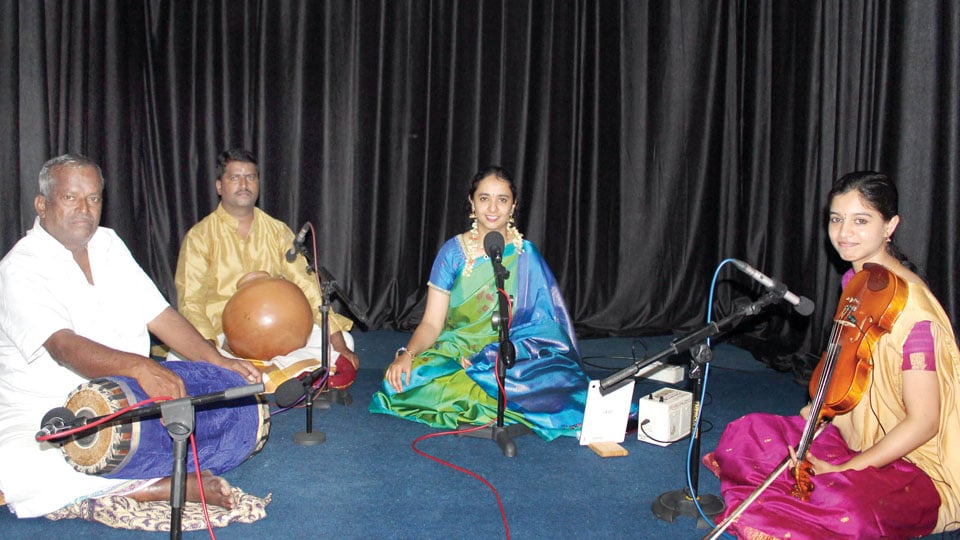 All of us witnessed the nightmare when the entire activities in each and every field of life came to almost a standstill due to the unprecedented pandemic. In the field of music also, artistes entirely dependent on their skills, faced a dead end without any hope. Under such circumstances, the efforts of many cultural organisations to hold online music programmes brought some light at the end of the tunnel to the art fraternity.

Among such organisations, Sri Thyagaraja Sangeetha Sabha Charitable Trust of Mysuru has also played a prominent role. Since the second half of May 2020, the Sabha has commenced streaming quality music concerts by acclaimed musicians on its social media regularly at weekly intervals and has earned the goodwill of artistes and music lovers alike.

In addition, the effort of the Sabha to stream the Navavaranakrithis of Muthuswami Dikshitar, specially composed to sing on specified days of Navaratri, rendered by young musicians aptly on the stipulated days, has drawn much applause from rasikas.

Recently the Sabha has come up with an innovative series, ‘Yuva Sangeetha Sambhrama-2020’, with a view to provide opportunities to the talented young musicians. A concert of one hour each by promising young artistes is being premièred on their YouTube channel on every Saturday evening at 5 pm, starting from 24th October.

The introductory concert under the series was presented by Vidu. Madhuri Kaushik and team. Madhuri, already known for her talent, had her music training from Vidu. Rohini Manjunath and Vidu. Dr. Sukanya Prabhakar. Presently she continues higher learning from Vidushis Ranjani and Gayatri from Chennai.

Madhuri began her concert with Sri Thyagaraja’s ‘Shobillu Saptaswara’, in Raga Jaganmohini and Rupaka Tala, in a brisk pace. The next was ‘Janani Ninnuvina’, of Subbaraya Sastri in Raga Reethigowla and Mishrachapu Tala, unfolding the rich emotional beauty of Reethigowla and the singer could ably provide justice to the sahithya, bhava and musical aspects of the composition.

The next and the final composition of the concert, Sri Thyagaraja’s ‘Enduko Nee Manasu Karagadu’, in Raga Kalyani, and Adi Tala, drew much attention. A rare krithi in slow pace, ornamented with extensive alapana, impressive neraval and a lightning stream of kalpanaswaras, proved the ability of the singer and enhanced the beauty of ‘Kalyani’.

The accompaniments by Vidu. C.V. Shruthi (violin), Vid. M.S. Jayaram (mridanga) and Vid. M.J. Kirankumar (ghata) were very supportive and contributed to the manodharma of the main artiste.

There is no doubt that the concert brought a happy and promising beginning to the series.

The second concert (Oct. 31) of the series was presented by Vidu. Aishwarya Manikarnike and team. Aishwarya hails from a family of musicians. She has been receiving her vocal and veena tutelage under her grandmother, senior Veena exponent Vidu. M.K. Saraswathi and her mother; singer, veena player Vidu. Rajyashree Srikanth Josyer.

Aishwarya began the concert with the composition of Sri Thyagaraja, ‘Muddumomu’ in Raga Suryakantha and Adi Tala. She then moved to ‘Mamava Sadaa’, one of Swathi Thirunal’s compositions in Raga Natakuranji and Rupaka Tala, decorated with brisk and attractive alapana and kalpanaswaras.

A beautiful composition of G.N. Balasubramanian in Raga Nalinakanthi and Rupaka Tala, ‘Nee Padame Gati Nalinakanthi’ was the next presentation, rendered in brisk pace, melodiously and effortlessly. The rendition of Mysore Vasudevacharya’s slow paced ‘Maanamutho’, in Raga Shanmukhapriya and Adi Tala, needs a special mention. The young artiste showed her capability in matured manodharma of alapana, bhava in neraval and attractive swaraprastara in the portrayal of this composition. The concert concluded with a devaranama of Purandaradasa ‘Aadahodalle Makkalu Aadikombuvaru Nodammaa,’ set in Ragamalika.