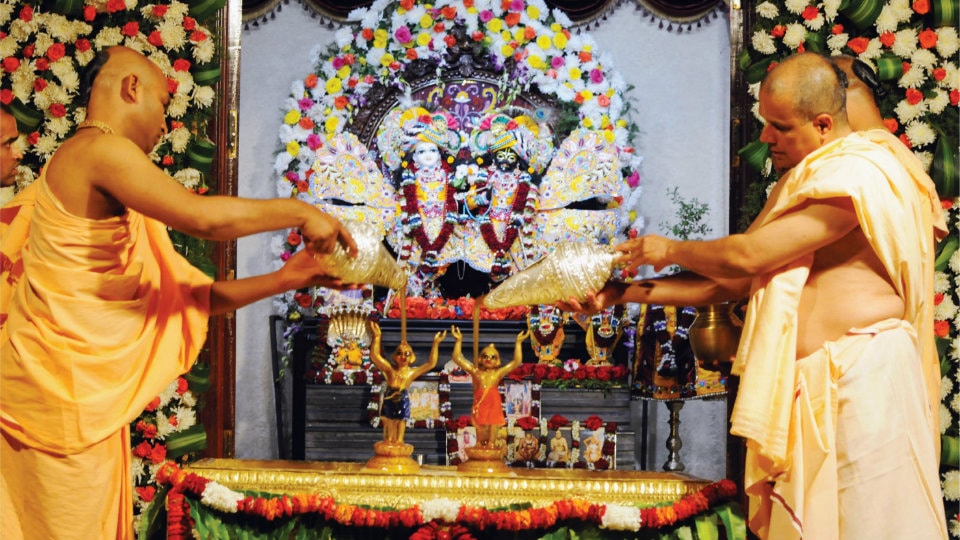 ISKCON celebrated the 531st birth anniversary of Sri Chaitanya Mahaprabhu at its temple at 18th Cross, Jayanagar on Sunday last.

Commemorating the festival, devotees went on Nagar Sankirtan chanting holy names of Lord Krishna at 6.30 am.

The evening festival started at 6 pm with Tulasi Puja followed by an elaborate Abhisheka (bathing ceremony) of the Deities of Gaura Nitai (Lord Chaitanya and His associate  Nityananda) along with Arati and Sankirtan.

The special feature of the festival was a play performed by a group of young students under the title “Bhakta Vatsala Chaitanya”  based on the pastimes performed by Lord Chaitanya Mahaprabhu during His South Indian tour. The drama depicted how Lord Chaitanya, who is the most munificent incarnation of Lord Krishna, made even the animals in Jarikhand Forest to chant the holy names of Lord. Further, the drama highlighted the episodes of Lord Chaitanya protecting His devotee Kala Krishnadasa, who was allured by a class of nomadic people called Bhattaharis.

The drama also displayed Lord Chaitanya protecting the devotion of His devotee Ramadasa Vipra, by presenting the evidence from Kurma Purana that Ravana kidnapped only  the Maya Sita and the real Mother Sita was protected by Agnideva, who was returned to Lord Ramachandra carefully after killing of Ravana during Agnipariksha.  The most confidential form of Lord Chaitanya, who is Krishna Himself in the mood of Srimati Radharani which was displayed to Ramananda Raya, was also depicted.

Five hundred years ago, Lord Chaitanya Mahaprabhu  predicted that the chanting of Lord Krishna’s Holy Names would spread throughout the world. This prophecy was fulfilled by His Divine Grace A.C. Bhaktivedanta Swami Prabhupada, the Founder-Acharya of ISKCON and the eleventh in the disciplic succession (parampara) of Sri Chaitanya Mahaprabhu.