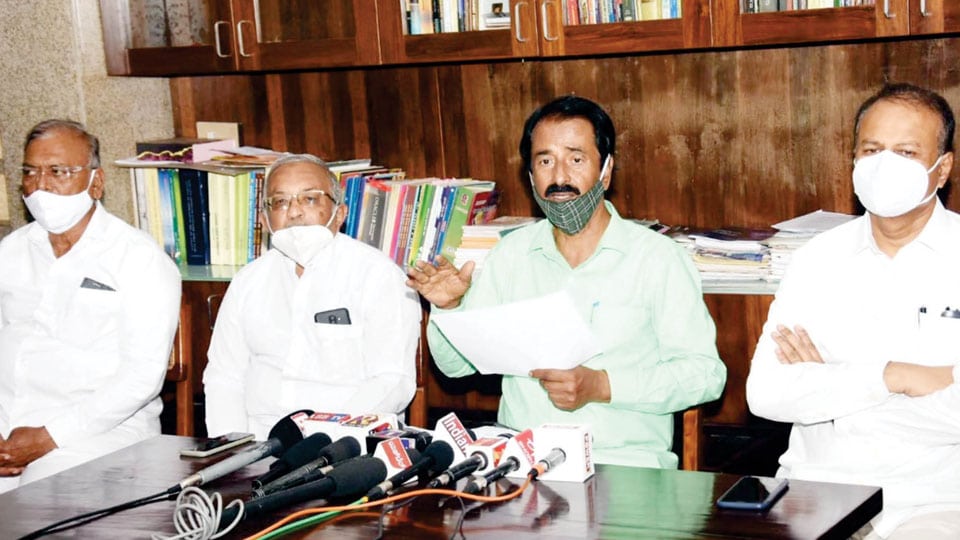 Addressing a joint  press meet at his (Vasu) residence in Jayalakshmipuram  here this morning along with former Chamarajanagar MP R. Dhruvanarayan, Vasu lashed out at the Central and State Governments for mishandling of COVID crisis.

Maintaining that Mysuru Maharajas had built big Hospitals like K.R. Hospital and PKTB Sanatorium, which handled deadly epidemics such as Plague and TB well decades ago, Vasu said that the present Government lacked vision and ideas  to check the spread of the deadly COVID-19 pandemic.

Asserting that the District Hospital, Trauma Care Centre, Jayadeva Hospital, Krishnajammanni Super-Speciality Hospital and Government Ayurveda Hi-tech Panchakarma Hospital came up when Siddharamaiah was the Chief Minister and he (Vasu) was Chamaraja MLA, Vasu contended  that the present Government does not have the capability to even recruit necessary staff and provide infrastructure in these Hospitals, which is one of the prime reasons for  utter failure in COVID management.

Maintaining that the District Administration was totally ill-prepared for the second wave of the virus attack, the former MLA argued that Prime Minister Narendra Modi  should take the blame for the spread of virus in the country as he showed negligence in the early days of the outbreak last year.

Referring to shortage of oxygen in the district, Vasu wanted to know the reasons why the District Administration had failed in meeting oxygen requirement, when the district has five oxygen refilling plants.

Expressing gratitude to  Siddharamaiah for the construction of Hospitals when he was the Chief Minister, he said that this was possible as he did not seek any other favours such as official transfers and appointments.

Asserting that the nature of Mysuru would have completely changed had University of Health Sciences been set up in Mysuru as planned by Dr. Veerappa Moily when he was the Chief Minister in the 1990s, the former MLA said that K.R. Hospital would have become a Research Institute of national importance had the University been set up in city.

He also said that he was deeply disappointed when the Centre turned down a proposal to set up an AIIMS branch in Mysuru, citing policy matter.

Vasu urged the Government to set up Hi-flow Oxygen Plants and ramp up vaccination drive in the district. Former Chamarajanagar MP Dhruvanarayan,  who also addressed the press meet, said that the State is staring at Health Emergency, with the infrastructure crumbling like never before.

Batting for a complete lockdown in Karnataka as advised by State’s COVID Technical Advisory Committee, Dhruvanarayan argued that under the present circumstances, this  seems to be the only  formidable measure to check the spread of virus.

Claiming that Silicon Valley of Bengaluru had turned out into COVID Valley, Dhruvanarayan said that the Government should order a complete lockdown in the State and  at the same time announce a financial package for the poor and working class.

Noting that the interference of Courts in respect of oxygen supplies only goes to show the Government’s incompetence in handling oxygen crisis, he observed that the Court’s interference is a result of the complete failure of the administration  and Legislature.

Calling for replicating the measures taken by European countries like Italy, France and  Germany  for tackling the deadly pandemic, Dhruvanarayan alleged that the Prime Minister had failed to condole the deaths of 24 COVID patients at  Chamarajanagar District Hospital, which shows that the PM has little concern for COVID deaths.

Contending that the unearthing of a bed-blocking racket in BBMP by BJP MP Tejasvi Surya was aimed at diverting the attention of the people from Chamarajanagar COVID deaths, which had earned nationwide attention, he said that the unearthing was timed at covering up the Government’s total  failure in COVID management.

He urged the Government to complete the works on the 500-bed Hospital in Chamarajanagar, which is attached to Chamarajanagar Government Medical College and immediately open it for public. Congress leaders Advocate Aravind, Shivamadu, Mohan and others were present at the press meet.