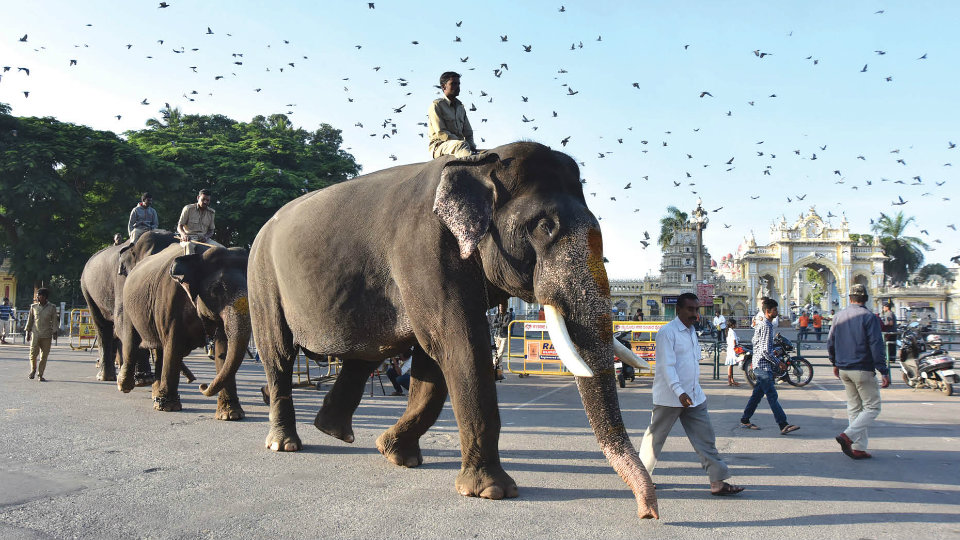 Mysuru:  Led by mighty Arjuna, the Golden Howdah-carrying elephant, the first batch of six elephants began their training this morning to acclimatise themselves to roads and traffic on the Jumboo Savari route.

The first batch of elephants which arrived in Mysuru on Sept. 2, were housed at Aranya Bhavan in Ashokapuram before they were welcomed into the Mysore Palace on Sept. 5. The elephants underwent weight checking yesterday and the training sessions commenced from today.

The six elephants — Arjuna, Varalakshmi, Dhananjaya, Vikrama and Gopi — came out of the Balarama Gate (North Gate) of the Palace at about 7.15 am and walked majestically via K.R. Circle, Sayyaji Rao Road, Government Ayurveda Hospital Circle, Old RMC Circle, Bamboo Bazaar, Moulana Abul Kalam Circle (Highway Circle) and  reached the Torchlight Parade Grounds in Bannimantap at about 8.30 am.

During the march, a small break of about three minutes was given to the elephants. At Old RMC Circle, Mahouts, Kavadis and others accompanying the elephants had tea for 5 minutes and proceeded further. 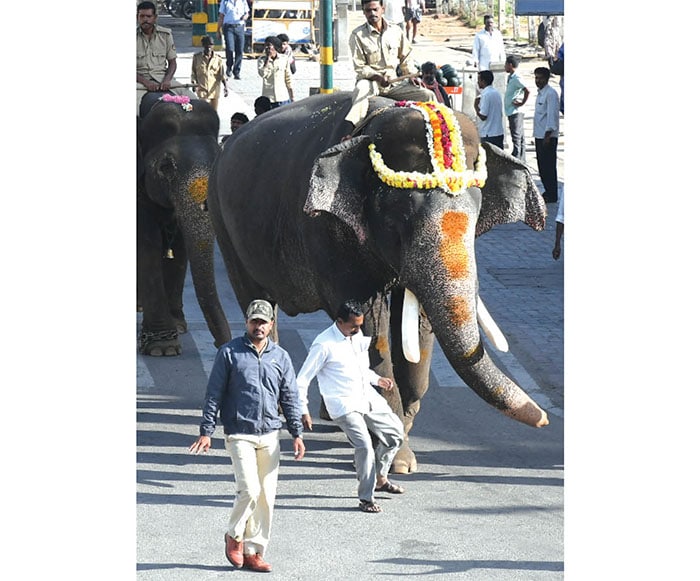 Rangaraju kicking off a sharp object preventing the elephant from stepping on it and injuring itself.

Upon reaching the Torchlight Parade Grounds, Mahouts, Kavadis and others were provided breakfast while the elephants quenched their thirst at the temporary pond made for them there. They were also fed with food which was brought in a vehicle that accompanied the elephants.

During the march, one Police Jeep in the front and one in the rear provided security to the elephants. While motorists gave way, pedestrians and passers-by were seen clicking photographs on their mobile phones.

In the absence of magnetic roller which is used to remove nails and other sharp metal objects on the Jumboo Savari route, Rangaraju, Assistant to the Veterinarian, moved in front of the elephants scanning and removing sharp metal objects. A pond constructed near the Torchlight Parade Ground for the elephants to quench their thirst.

Meanwhile, Veterinarian Dr. Nagaraj speaking to Star of Mysore said that as the magnetic roller was kept unused after last year’s Jumboo Savari, the magnetic power of the roller had reduced. It will be charged and put to use in two days.

READ ALSO  Musings on Dasara Exhibitions down the ages...

He further said that the elephants will undergo weight training in four days and will be made to carry sand bags on their backs.