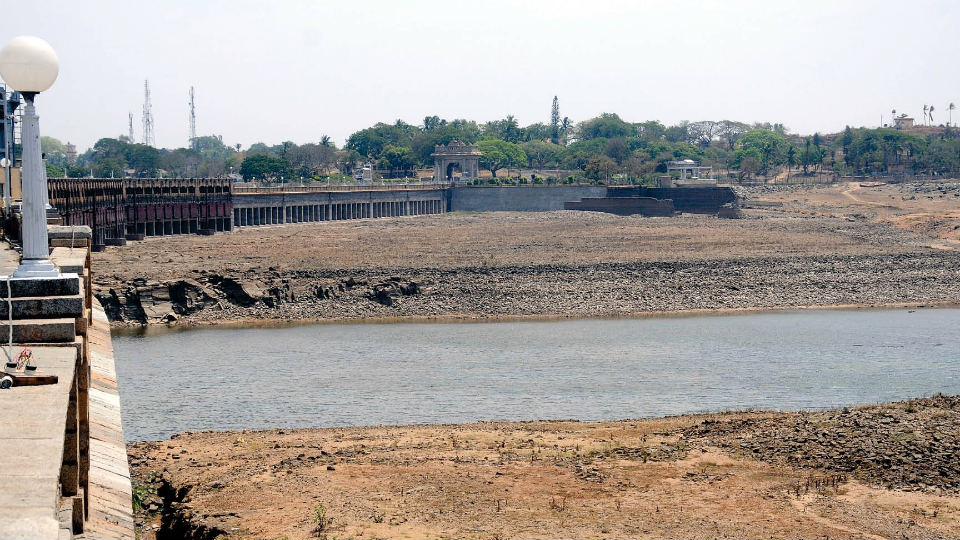 Bengaluru: After three consecutive years of drought, the Cauvery Basin will witness one more year of distress. Weak monsoon so far has resulted in poor inflow into the four reservoirs in the Cauvery basin — Krishna Raja Sagar Dam, Kabini, Harangi and Hemavathi reservoirs. Added to the woes is the continuous release of water from the KRS Dam to Tamil Nadu.

As per the Karnataka State Natural Disaster Monitoring Centre (KSNDMC) data, the total storage stood at 26 tmcft (thousand million cubic feet) this year as against 57.89 tmcft in 2016. According to the Cauvery Tribunal award, Karnataka has to release 44 tmcft of water for the period June 1 to July 31. But Karnataka could so far release just 2.2 tmcft.

As on this morning, the water level at KRS stood at 78.10 ft and yesterday it was 78.17 ft. The amount of water stored in the reservoir is about 10 tmcft.

Addressing a press conference in Bengaluru yesterday, Water Resources Minister M.B. Patil said the State had not lost hope yet as the Indian Meteorology Department had forecast spells of rain in the next one or two weeks. “We will convene a meeting of all stakeholders to decide on the next step of action,” he said.

“Right now a small quantum of water is being released to Tamil Nadu depending on the inflows into the reservoirs. We hope the situation will improve with copious rains in the coming days to enable the State to increase the discharge to Tamil Nadu,” he said.

He said the government is keeping its fingers crossed and hoping for good rain in the coming days. He said priority will be accorded to drinking water, followed by agriculture and supply of water to industries. “The kharif season has begun and there is no adequate water for irrigation purposes. Farmers should realise the situation,” the Minister said.

Patil said given the distress situation, it is not practically possible for Karnataka to release the stipulated quantum of water to Tamil Nadu as per the Cauvery Water Disputes Tribunal award. The present cumulative inflow into the reservoirs is about 9,500 cusecs and about 30 per cent of which is being discharged. This includes discharge to Tamil Nadu and to meet the drinking water needs of Bengaluru, he added.