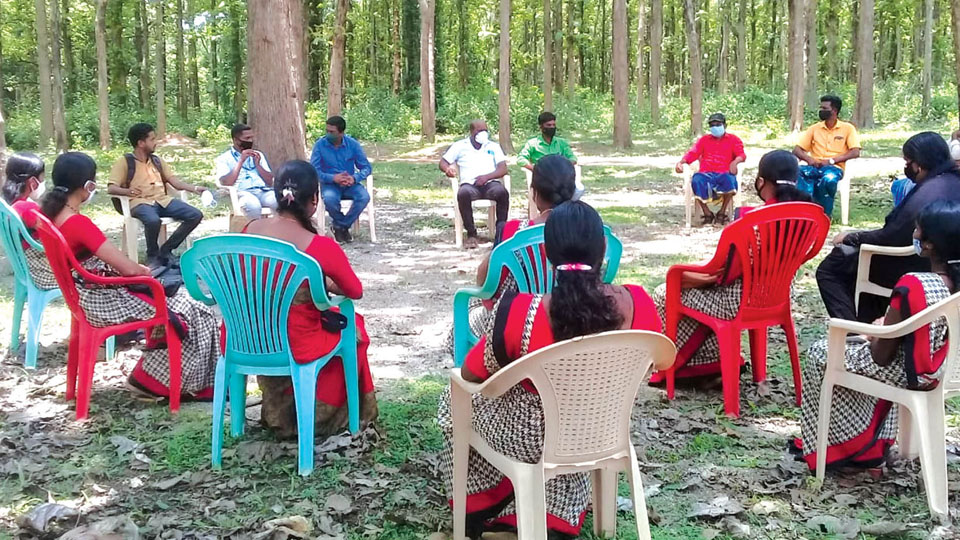 Mysore/Mysuru: At a time when the District Administration is battling to bring down rising COVID caseload, the measures taken by local Gram Panchayat (GP) and Forest Department has ensured that tribal hamlets in Nagarahole Tiger Reserve are free of the virus thus far.

Over 2,000 tribals living in 11 tribal hamlets of Nagarahole Tiger Reserve located in Antarasanthe hobli of H.D. Kote taluk in the district, have earned national attention for keeping away the virus from their hamlets even as several other villages in the vicinity are affected by the pandemic.

Though thousands of vehicles used to ply on Mysuru-Manandavadi Road that runs close to these tribal hamlets and connects Karnataka with Kerala, the strict measures taken by the Forest Department officials  and GP has ensured that these hamlets are not affected. The measures has also ensured that people in 13 villages in the vicinity are safe from the deadly pandemic.

D.B. Kuppe GP has jurisdiction over 11 tribal hamlets and 13 villages in the surroundings. As the COVID caseload began to surge all of a sudden in the second wave of the attack, the health and safety of more than 7,700  people living in these hamlets and villages was taken care of by H.D. Kote Taluk Administration with support from the Forest Department.

As a first step, the entry of outside people, especially those from villages on the Kerala side of the border, were barred from entering villages and hamlets.

The authorities banned crossing the border by boat on Kabini river flowing through the forest that separates the two States, one month ahead of the surge. The authorities also ensured that there is no physical meeting between villagers living in hamlets and villages along Kerala border. Also, no vehicle travelling on Mysuru-Manandavadi Road was allowed to stop near the villages and hamlets. Besides it was also ensured that vehicle drivers maintain a perfect hygiene and stay a safe distance from villagers. This apart, the entry and exit from villages was completely shut down and no vehicle allowed stopping or parking in the vicinity of the villages.

Pointing out that a door to door  survey was carried out in the villages and hamlets soon after the second wave began, he said that entry or exit of people from villages was strictly monitored.

Noting that boat travel to enter Kerala by crossing Kabini river  was banned, thus cutting off ties between hamlets and villages on Kerala side of the border, he said that all tribals were tested early soon as they showed signs of the infection.

Pointing out that Medical Kits that contained prescribed tablets were distributed among tribals, Prashanth said that five people tested positive in the initial stages and attributed the infections to one among them from Anemala village who had gone to Kerala in his personal capacity. However, all the infected  asymptomatic patients were immediately shifted to a COVID Care Centre (CCC) after they were tested at Kerala lab.

Highlighting the measures taken by the Taluk Administration elsewhere in the taluk, he said that all people coming under D.B. Kuppe GP have been distributed ration kits that contained 10-kg of rice and other ration articles.

All the 7,770 people living in the GP jurisdiction are safe from contracting the virus, he added.