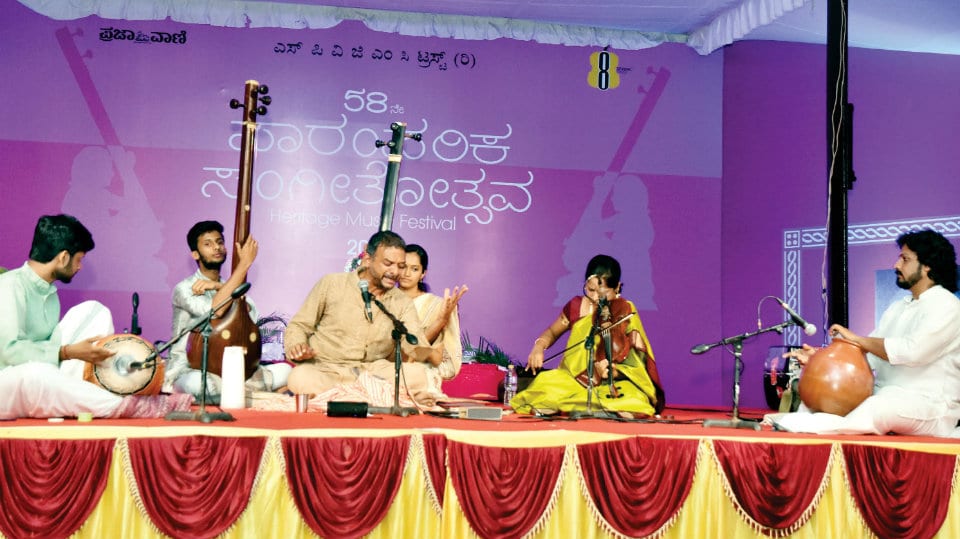 T.M. Krishna is a celebrated star in classical music. On the 13th day of the Heritage Music Festival at 8th Cross, V.V.Mohalla, the street was overflowing with Karnatak music connoisseurs and eager listeners waiting patiently to hear his music. The expectations ran high, as the reasons are many.

Some eccentric features of Krishna’s concerts are his silence in the midst of a composition while the listeners and the accompanists wait in anticipation, his giving huge importance to the violinist (the violinist sits next to him facing the audience unlike in other concerts where the violinist sits on the left hand side of the artiste),  asking her/him to play manodharma (an alapane or a kalpana swara) while more is expected of him (sometimes he sings the swaras that they play just as the violinist follows the vocalist), taniyavartanam at a time when it is least expected and often two, accompanists allowed to lead the concert many a time — while some people deem it as generosity, the traditionalists frown, and above all, breaking the tradition and singing a varna in the middle or towards the end of the concert, as he did this time too, much to the apprehension of the conventionalists present. It is difficult to decide if the audience gather in such huge numbers to listen to his music or to see what is new in the present concert.

Eschewing his penchant for a languorous style, Krishna was full of verve as he began the concert with ‘Muttuswami Deekshitar’s ‘Ranga Pura Vihara’ in Brindavana Saranga. While he enjoyed each syllable of the kriti while he presented, neraval was unusually chosen for the line ‘Angaja Janaka Deva’, developing the swaras at ‘Muni Sankata harana Govinda’. While the listeners sat in anticipation of the continuation of kalpana swaras, violinist Akkarai Subbulakshmi was asked to play the kalpana swaras, much to the disappointment of the listeners

The audience nodded in appreciation while Krishna started the Devagandhari Alapana, bringing Tyagaraja’s ‘Tulasamma Mayinta’. A  rarely sung composition  ‘Chinna Nadana’ in a rare raga Kalanidhi by Tyagaraja was presented with also a neraval at the unusual ‘Goppa Daivama Tyagaraja’. Taniyavartanam at the most unexpected junction of the concert happened here!

Surprisingly again, Shankarabharana Alapana began at the tarasthayi and after a brief elaboration, ended abruptly also in Tara sthayi ‘g’, leading to only a part of a composition ‘Purana Purusham Purantakam Shankarabharana Bhasamana Deham.’ While some listeners scratched their head to guess the composition, some others smiled amusingly and the conservatives were struck with horror as the composition itself was missing, which is believed to be a dishonor done to the composer. The part chosen is the last part of the charana of Deekshitar’s composition ‘Sadashivam Upasmahe’. While kalpana swaras only in the first speed to the chosen part were relishing, the composition was not sung at all and the audience were left to imagine the first line of the composition.

Natikuranji was chosen next and with no raga preamble, tana was taken directly, wherein Subbulakshmi too demonstrated her long standing experience and intelligence. While the listeners wondered which composition or Pallavi would be sung, the vocalist again took the audience by surprise by beginning the varna ‘chalamela’, for which swaras were also knitted for the charana part. The second taniyavartanam followed for the varna!

The rest of the concert was reserved for light compositions. ’Broohi Mukundeti Rasane’ by Sadashiva Brahmendra in Kuranji, wherein Krishna beautified the composition with enchanting sangatis, ‘Entanipudu ke’ in Kalyani, which was excellently presented in a slow unhurried manner giving weight to the lyrics of the composition, Pu.Ti.Na’s “Nagna Vipina” again in kalyani on request, ‘Manavyalakimchara’ in Nalinakanti and a D.V.G. song ‘Ene shuka bhashini’ in Behag from the “Antahpura Geetegalu” also on request occupied the last half hour of the concert.

N.C. Bharadwaj extended superb support on mridanga and filled the frequent gaps of silence between the compositions. He and Krishna Kumar on mridanga and ghata alternated between soft and strong patterns to suit the mood of the kritis. Two tamburas in tune on stage, a regular concert requirement for Krishna, were not only a satisfactory sight, but enhanced the beauty of the concert.